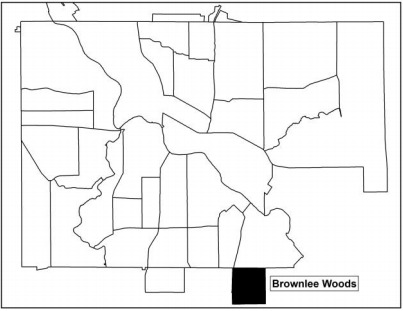 For the first eighteen years of my life, I knew almost nothing about the Brownlee Woods, which was way over on the southeast side of Youngstown, almost into Struthers. Then I started dating the woman who became my wife, and Brownlee Woods became a regular destination. She lived in one of the Cape Cod bungalows built in the 1950’s. For the first year or so, she worked at the Brownlee Woods library. We went to one of the biggest wedding receptions we have ever attended, at Powers Auditorium, when one of the librarians was married. We used to go for walks on summer evenings along Sheridan Road and into some of the older neighborhoods of brick homes. Sometimes we would go over to Ipes Field and play tennis. Two of her uncles lived in Brownlee Woods, and the three brothers helped each other build garages on the same plan her father designed. Her mother lived there until 1996, and we made frequent trips back to see her, taking her to Nemenz to buy groceries and to her senior group at what was once the Bethlehem United Church of Christ. I never thought much about the history of the area.

Brownlee Woods forms a square with its north border along Midlothian Boulevard, its west border I-680, Youngstown-Poland Rd on the east, and Thalia Avenue on the South. It gets its name from the original landowners, James A. and Rebecca Brownlee, whose homestead was on Youngstown-Poland Road and consisted of approximately 235 acres. He was a successful farmer who at one time supplied most of the meat consumed in Youngstown. He died in 1918. An article from 1930 written by Esther Hamilton speaks of Miss Mary, James (the son), and John Brownlee living in the old homestead, now shrunk to six acres. All three were in their seventies at that time.

By 1915, 200 families lived in what was already being called Brownlee Woods. A Vindicator article from 1926 quotes a resident:

On December 24, 1916, Brownlee Woods United Presbyterian Church held its first services, with a Sabbath school beginning on January 7, 1917 and the church being formally organized on February 11, 1917. In 1918, they built their first structure on the church’s present site. It was followed in the same year by the Third Reformed Church pastored by Rev. E. D. Wettoch, who met in a “bungalow chapel”! In 1923, Brownlee Woods was annexed by the city of Youngstown. By 1927, ground was being broken for a Brownlee Woods Branch Library.

There were two waves of home construction in Brownlee Woods. The first of these was in the late 1910’s and 1920’s. The second wave was in the 1950’s. The home my wife grew up in was built in 1954. The older homes were in a variety of styles: Colonial, Tudor, Victorian, and Craftsman style homes. The newer homes were Cape Cod bungalows and ranch style homes.

In the early 1960’s Paul C. Bunn Elementary School was opened to serve children in the community. The original building was razed in 2007 and a new building opened in 2008 and recently celebrated its tenth anniversary. There is also the Montessori School of the Mahoning Valley in the neighborhood on Lynn Avenue. Youngstown-Poland Road continues to serve as the business corridor of the community with Nemenz, various fast food restaurants, local bars, and the Holiday Bowl (that brings back memories).

In recent years, Brownlee Woods has also faced issues of blight and crime. An active Brownlee Woods Neighborhood Association meets monthly.  In a 2016 Business Journal article, association president Nancy Martin speaks of the approach they are trying to take.

The association has worked on issues of safety, drug sales, and taking care of homes and other buildings in the area as well as working with the Youngstown Neighborhood Development Corporation on a five year plan. Some of their efforts include new signage, planting trees, and benches in a local park.

It’s hard to believe the Brownlee Woods neighborhood is one hundred years old. It is good news that there is an active neighborhood association working to improve the community. Hopefully it can be one of a growing number of bright spots in Youngstown as the neighborhood moves into its next century of life.

21 thoughts on “Growing Up in Working Class Youngstown — Brownlee Woods”