The Great Flood of 1913 is an event probably no one reading this remembers. But my grandparents, and those of their generation, talked about it. It rained for four days and nights between March 23 and March 26, 1913. Similar to the Thanksgiving snowstorm of 1950, three different weather systems came together and stalled over the Ohio Valley, blocked by a high pressure system to the east. Flooding occurred throughout Ohio with some of the worst flooding in southwest Ohio and in Columbus. But Youngstown suffered severely as well.

Estimates range between 4.26 inches and 7 to 9 inches of rainfall over the four day period in the Mahoning Valley. Back then there were no reservoirs or flood control measures and so all the water from the tributaries to the Mahoning River caused it to crest at 26.5 feet, 10 feet above the flood stage of 16.5 feet, and 7 feet higher than any previous storm. The peak discharge of the Mahoning River was estimated at 44,400 cubic feet per second. 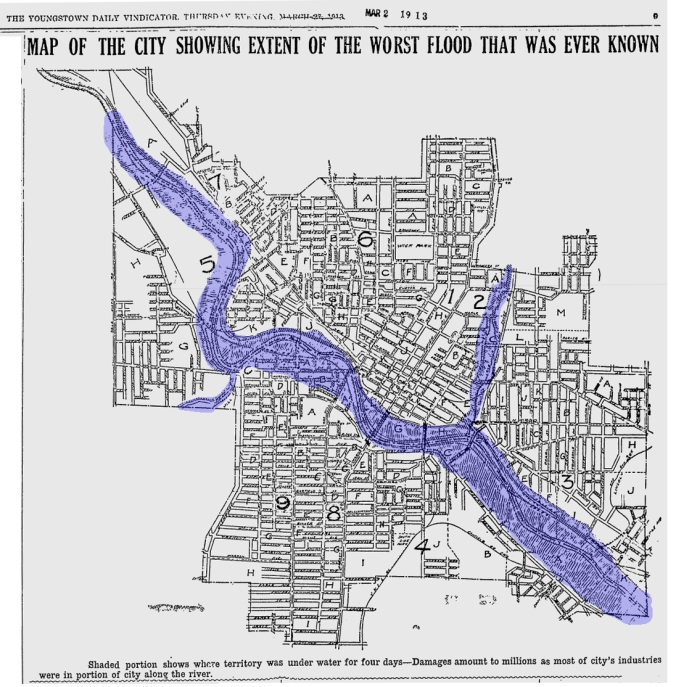 Youngstown is a hilly city, through which the Mahoning River runs. Therefore many areas of the city were spared flooding, but not the low lying areas along the Mahoning River and Crab Creek. Unfortunately, Youngstown’s steel mills were built in the flood plain as well as the railroads that served them. Parts of downtown adjacent to the river were also flooded, including The Vindicator. Flooding destroyed the West Avenue and Division Street bridges, took out the water pumping station and the power station on North Avenue. Ironically, Youngstown was without drinking water in the middle of a flood!

Flooding at the B & O Station, Photo from Mahoning Valley Historical Society Archive

Damage estimates at the time were estimated at $2.5 million in the Youngstown area and over $100 million statewide. Governor Cox mobilized National Guard troops to provide disaster assistance and prevent looting. Youngstown Fire Department personnel played a key role in helping pump water out of the North Avenue power station, enabling power to be restored, and out of the press pit of The Vindicator, allowing the newspaper to resume regular publication. All told, about 25,000 people were temporarily out of work.

Flooding had been a regular occurrence along the Mahoning River. Joseph G. Butler, in his history of Youngstown describes floods as a yearly event, though none as bad as this. Sarah Gartland, of the Mahoning Valley Planning Commission states that there were six major floods between 1880 and 1913. This flood led to major changes. The flooding of the water pumping station ultimately led to moving Youngstown’s water supply to Meander Reservoir. Bridges were designed with higher spans so debris wouldn’t build up and then sweep the bridge away.

Most important was the development of flood control measures along the tributaries to the Mahoning River. In 1973, a flood protection project was completed on Crab Creek. Eventually five dams were built creating reservoirs that helped control the flow of water into the Mahoning–the Milton Dam in 1917, Berlin Reservoir (1941-43), Mosquito Reservoir (1943-1944), Shenango Reservoir (1963-1967), and West Branch (Kirwan) Reservoir (1963-1966). A map showing the locations of these reservoirs can be found in an article by Stan Boney, showing how Youngstown is better prepared to withstand rainfall totals like those experienced in the 1913 flood. The Milton and Berlin Reservoirs work together and reduce flooding on the Mahoning River 3-5 feet.

So when you boat on Milton or one of the other reservoirs, thank the Great Flood of 1913  and hope those engineers are taking good care of those dams. The flood of 1959 (I’ll write about that someday, perhaps) is a once in 43 year event, the flood of 1913 a once in 200 year event. Given some of the extreme weather of recent years, a major rain event is only a matter of time.

While there are no longer the same industries along the Mahoning there once were, anything close to the river, in its flood plain is at risk. Given that the 1913 flood was ten feet over flood stage, and the dams may halve that, it does appear flooding could still occur. The master plan for the Youngstown Riverfront Park and Amphitheater indicates that much of the site is within the 100- and 500-year flood plains of the Mahoning River (the Covelli Center is just outside the 500-year boundaries). Let’s hope planners are taking that into account.