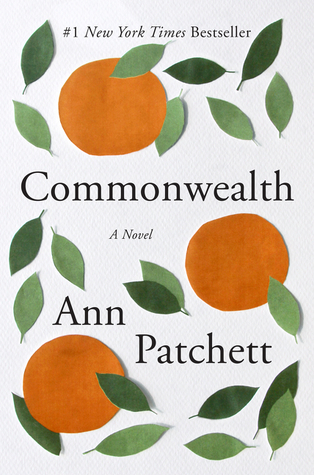 Summary: Traces the lives of six children and the parents from two families over five decades from the beginnings of an affair at a christening that broke up two marriages and threw the children together.

“The christening party took a turn when Albert Cousins arrived with gin.”

In one sense, the whole story of Commonwealth turns on that first line. Albert Cousins joins Fix Keating’s wife Beverly in the kitchen as they make drinks, and imbibe in a few, setting up the beginnings of an affair that led each to divorce their spouses, Teresa and Fix, throwing together the two Keating girls, Caroline and Franny, and the four Cousins children together, Cal, Holly, Jeannette, and Albie, who spend much of their growing up years together in Virginia (the Commonwealth).

The book moves between their childhood together, how this “blended family” negotiates the passage into adulthood, and maturity. Two of the six children dominate the narrative–Franny and Albie.

Franny, the baby at the christening seems to wander through much of her life, dropping out of law school, unlike her successful patent attorney sister, working as a cocktail waitress, and living for a number of years with novelist Leon Posen, who appropriates the family story in a best selling novel, Commonwealth, rejuvenating his career.

Albie, the youngest Cousins was the annoying younger brother, often dealt with by “tic-tacs” from his older brother (benedryl) that put him to sleep and out of their hair, which he was on the fatal day when Cal dies on an outing with the others. Only when he reads Posen’s book, given him as a bicycle messenger to publishers in New York, does he understand the unwitting part he played in his brother’s death, and figures out how the family’s story was appropriated. He’s staying with Jeannette and her husband in a cramped New York apartment. Meanwhile, Holly is off in Switzerland, meditating.

Fifty years later, Fix is dying of esophageal cancer and the other parents are aging. We see how the surviving children of these two families come to terms with their shared family history, the parents they lived with, and those they visited on custodial visits. The tender moments with Fix are those with Franny. Albie, who nearly burned down a school when he was living a difficult adolescence with Teresa becomes the one who checks in on her in her later years. Weirdly, despite Albie’s anger with Franny for giving away the family story, there is a bond between them as the youngest children that brings them together in the closing parts of the book.

Guns, kept but unused, figure both in the death of Cal, and with Fix who wants Franny to end his suffering. Gin also recurs at the end of the story between Albert and the baby at the christening–now mature Franny, married to Kumar in Chicago. Circles close, but Franny makes different choices, keeping “something for herself.”

I’m still deciding what I think of this book. As always, I love the writing of Patchett and the complexity of her characters and their relationships. There is no great crisis or drama–simply the wandering ways of different children trying to find their ways in life, the quarrels and reconciliations that occur in families. The number of children, the movements between childhood, early and later adulthood felt disjointed at times. Perhaps as much as anything, this reflects the disruption and disjointedness that affairs and divorce bring into the lives of all who are touched by them, and the ways children have to come to terms with step-parents, step siblings, non-custodial birth parents. It all seems very modern, a story many readers have lived themselves. Will they see themselves in Patchett’s characters? Will they like what they see or gain insight as they follow these characters through their lives? Will they want to? I’ll leave that to you.