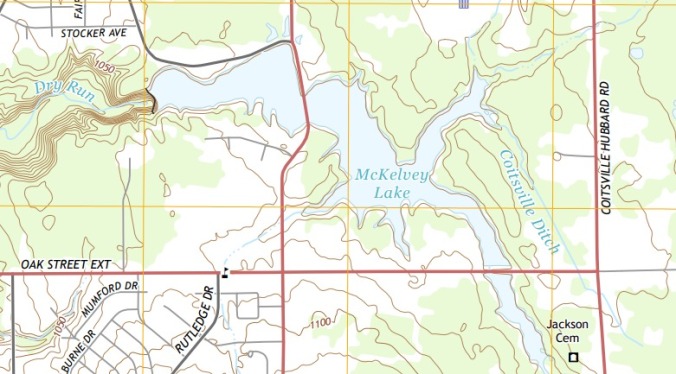 I’ve always been curious about McKelvey Lake. But truth be told, as a West-sider, I have to admit that this is one place around Youngstown that I have never seen. Pictures I’ve seen online show a scenic lake surrounded by trees, another natural oasis within the city limits of Youngstown.

Part of my curiosity relates to the name. Having worked at McKelvey’s in high school and college, I wondered if it was related to the McKelvey family who owned the department store. It turns out that Lucius B. McKelvey served as a director of the Mahoning Water Company that administered the water supply from the lake and later served as its president. I cannot find any account of the naming, so I’m guessing that it was connected with McKelvey’s tenure. He was a community leader who also was president of the Youngstown Automobile Club, was involved in a variety of community efforts, and in 1941, received an award for China relief, as well as serving as president of the G.M. McKelvey Company until his death in 1944.

McKelvey Lake was created by the damming of Dry Run, which flows into the Mahoning River at Lincoln Park. The current dam was built in 1926, creating a 125 acre lake three miles east of downtown, that is perhaps the most prominent feature on a map of the East side of Youngstown. The lake is surrounded by woodlands.

The Mahoning Water Company was later acquired by the Ohio Water Service Company which operated it for many years, followed by a series of mergers and acquisitions. It is currently owned by Aqua America. McKelvey Lake served as a reservoir for the Struthers area during the steel era, until the 1980’s. Since then, it has served as a back up water source, with Evans Lake as primary source to the service area.

The lake has something of a sinister history that belies its scenic appearance. The legend is that this is where organized crime figures “dumped the bodies.” A Vindicator article from 2012 describes a dive training exercise with the Mahoning County Sheriff’s Department that recovered knives, guns (including one traced to a homicide), vehicles, jewelry, and a mixing console. A 2013 story recounts the recovery of a couple vehicles. I suspect if the lake could talk it could tell some stories. The Jacobs Road bridge across the lake lends itself to dumping items (and at least one suicide attempt) and this is where divers have found a number of the items mentioned.

There is some hope for a better future. There have long been plans, according to The Business Journal, for turning this into a recreation area. In 2005, Youngstown received a $265,000 Clean Ohio grant to purchase 200 acres of woodland between the dam and Lincoln park to be preserved in its natural state in perpetuity.  A Vindicator article in 2017, which recounted this purchase, also reported support by Mahoning County commissioners for another Clean Ohio grant for the Natural Areas Land Conservancy (NALC) to purchase the lake and the surrounding woodlands from Aqua Ohio. The article reports that the intended use was “ ‘as an open and inviting community green space and passive recreational area suitable for activities, ranging from hiking and picnicking to kayaking and cross-country skiing, within an urban neighborhood that urgently needs an outdoor recreational amenity of this sort.’ ” A follow up article in June of 2017 indicated that NALC had received the grant and the hope was that the property would transfer in the next year. There is no more recent news about this effort and the lake is still listed as one of Aqua America’s Ohio water sources.

It is to be hoped that lake could be re-purposed as a recreation area, transferring it from private to public use. The increased public presence might curtail its use as a dumping ground while preserving its natural beauty. The June 2017 article indicates there has been severe dam deterioration that was supposed to have been addressed by October 26, 2018 by Aqua Ohio. I find no reports that this has been accomplished or about transfer of the property. Hopefully, this will be accomplished soon, if it has not been already, and that this beautiful resource will not be allowed to deteriorate.

6 thoughts on “Growing Up in Working Class Youngstown — McKelvey Lake”