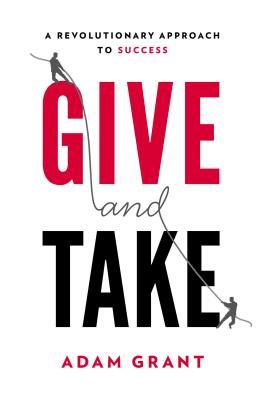 Summary: Proposes that many of the most successful people are givers who have learned how to give without being doormats and without expectation of return and explores why such giving is so powerful.

It is common to think that robust success in any field requires a “winner take all and devil take the hindmost” approach that zealously pursues one’s own interests. Psychologist Adam Grant’s research has led him to a very different conclusion. For one thing, he identifies three styles of relationship styles: givers whose predominant approach is giving without expectation of return, takers who tend to get far more than they give, and matchers, who balance giving and taking. Not surprisingly, he found out that the givers were the least successful. The surprise was that those who were most successful, most productive, were also givers. Takers and matchers fell in between.

This book explores why some givers are so successful, and what distinguishes them from the givers who are not. He begins by distinguishing between givers and takers who are good at looking like givers. The contrast he offers is between Ken Lay, who presided over the demise of Enron, who seemed to do favors for the rich and powerful but built a company that served his interests and was focused around him, and Adam Rifkin, a shy Silicon Valley entrepreneur with over 3000 LinkedIn connections, and the most connections of anyone to those on Forbes’ most powerful people list. Both were networkers, but the difference was that Rifkin gave far more than he received, and without expectation of return. It is from Rifkin that we learn about the 5-minute rule that he zealously pursued: “You should be willing to do something that will take you five minutes or less for anybody.” Rifkin also teaches us the practice of not writing off our “dormant” networks, the people we once knew.

Givers are good collaborators. Grant profiles George Meyer, a comedy writer whose impact far exceeded the number of credits he received on The Simpsons. Meyer would often generate ideas and give them to others, and elevated the whole team of writers, contributing to the long-running success of the show. Perhaps his most famous contribution is “meh”–a new word for boredom or apathy, a contribution he didn’t even remember until other writers jogged his memory!  Again, Grant offers a contrast, this time with Frank Lloyd Wright, the architect, whose least successful period was when he worked alone, and yet who hogged credit from his apprentices.

Givers look for potential in people and create self-fulfilling prophecies, often recognizing diamonds in the rough. At the same time, when things don’t work out, their identity is not tied up in the decisions in the same way it is for matchers or takers. They more quickly help people move on when they need to.

Givers learn the power of powerless communication. Instead of trying to win their way by wowing others, they take more modest approaches that give others the space to come to the conclusion one hopes they will come to, often by questions or more tentative approaches.

The last part of the book focuses on the distinction between unsuccessful and successful givers. Successful givers figure out how not to burn out. They learn to be “otherish” givers rather than selfless. They find ways to give to causes they care about, and then end up giving more. Grant talks about the chunking principle–that giving works best when done in chunks rather than sprinkled through one’s schedule. Givers who devote at least 100 hours over a year to their cause find more satisfaction. Effective givers also learn to identify and focus their giving efforts on other givers. As they lead organizations, they foster cultures of giving by their own active giving, by encouraging a “pay it forward” attitude. In these situations, even matchers and takers learn how to act like givers, further enriching the organization. He features organizations that set up “reciprocity rings” like Freecycle. Grant concludes the book with a list of “actions for impact.”

This was a fascinating and challenging book for me to read from my faith perspective as a Christian. My faith is grounded in the extravagant love of a giving God who even gives his Son for humanity’s redemption. It leads to an ethic of grace, of generous giving without expectation of return, of forgiveness without payback. Grant’s book, without referencing faith, raises the question: am I a giver, taker, or matcher? Also without referencing faith, he offers evidence that giving is the ground of healthy and flourishing relationships and organizational cultures, defying the apparent common sense of a cutthroat ethic. Most of all, his diverse selection of examples suggest that this is not exclusive to the non-profit world, but rather touches on something that is fundamental to the better angels of our nature.

I also like the challenge to actively give. I think I’m going to start with Adam Rifkin’s five minute rule. It actually sounds kind of fun to see where that will lead!

One thought on “Review: Give and Take”