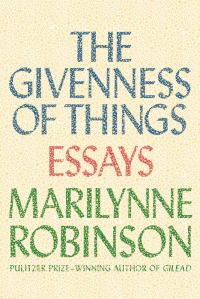 Summary: A collection of essays drawn from various lectures questioning our prevailing ideas through the lens of John Calvin, and others in the Reformed and Humanist tradition.

If you have read Marilynne Robinson’s fiction, you have the sense that there is a world of theological thought undergirding her narratives, particularly reflected in her lead character, Reverend John Ames. To read her essays is to enter into that rich theological world, and the extent to which this woman reads.

It is also to experience a voice that seems from another time, questioning our prevailing ways of thought. Like C. S. Lewis, Robinson is a reader of old books, particularly old theologians like John Calvin and Jonathan Edwards, and she allows these voices of another time to question our accepted ways of looking at things.

One example is the essay from which the title of this collection is drawn, “Givenness.” The essay focuses around the ideas of Jonathan Edwards’ Religious Affections and the intrinsic character of the affections of love, joy, hope, desire, and others in our experience of faith. Here, and in other essays, she argues against the scientific reductionism that reduces the affections to the firing of neurons. Similarly, the opening essay on “Humanism” describes the glories of the works of the mind that came out of the Renaissance, and challenges the reductionism that would explain all of this through evolutionary mechanisms and physical processes. It is not that she is anti-science. It is obvious that her reading includes and delights in a great deal of science writing. It is the scientism that asserts hegemony over all domains of human experience to which she objects.

The book consists of seventeen essays, most with one word titles like “Reformation,” Servanthood,” or “Limitation.” Perhaps the most striking for me was her essay on  “Fear.” These statements were particularly arresting:

“First, contemporary America is full of fear. And second, fear is not a Christian habit of mind….As Christians we are to believe that we are to fear not the death of our bodies but the loss of our souls” (p. 125).

She explores how this drives the fearful nationalism evident even when she was writing these essays, and the stress on preserving and extending the Second Amendment in the acquisition and proposed “right” to concealed carry. She also wonders about the financial interests exploiting this culture of fear.

Her essay on “Theology” explores not only theologians like Jonathan Edwards, but the theological content of the plays of William Shakespeare (whetting my appetite to read some Shakespeare). She explores particularly the ways Shakespeare handles reconciliation and matters of mercy, grace, and forgiveness.

These are simply tastes of what you will find in this rich collection representing Robinson’s thought. Prepare to read rigorously, and to explore the intellectual by-paths Robinson will take in exploring an idea. One must pay close attention to follow the thread of her arguments. Again, like Lewis, one has the sense that she brings everything she has read to anything that she says.

Finally, the book concludes with a two-part conversation with Barack Obama while he was president. As much as anything, he is interviewing her and what a delight to listen in on this wide-ranging conversation between two literate persons. One of the moments that reflected one of the president’s deep regrets was his struggle to close the gap between Washington and Main Street, the ways we engage with each other in everyday life, and the distance between that and our political discourse–our compassion toward the needy near us and our fears of “them” — a comment evoked by Robinson’s essay on fear.

One might critique her essays as reflecting a very Euro-American focus and a lack of engagement with writers outside the Western theological, philosophical and literary canon. There may well be some validity in that critique, but perhaps she is doing something very similar to those calling for other voices, in drawing on voices no longer a part of our cultural discourse, and who speak to our contemporary ideas from another perspective, and from another time.

2 thoughts on “Review: The Givenness of Things”