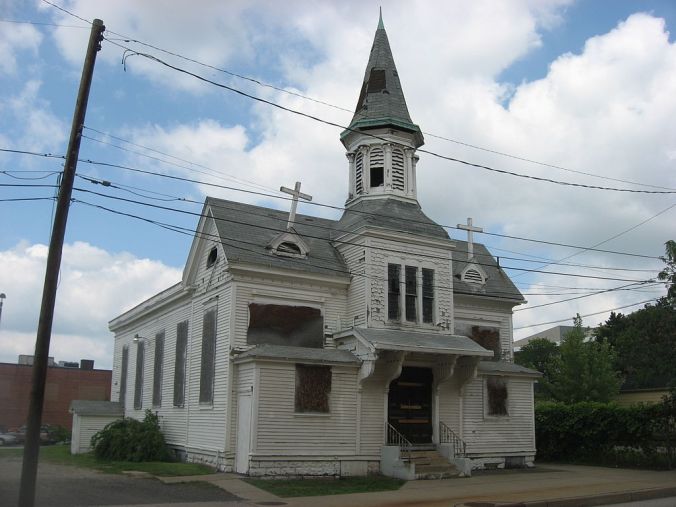 When I was a student at Youngstown State, I would often finish classes in the afternoon and walk down to McKelvey’s, either to work on Monday and Thursday evenings when they were open, or to catch a ride home on other days, with my father, who also worked there. My route would take me past the magnificent St. Columba’s, but also past a much plainer church building on the other side of Elm St., the Welsh Congregational Church. The church had wood siding painted white, similar to many churches one sees in rural towns, but with a cruciform shape with the two arms toward the front of the building. Dormer windows had crosses above them, and a steeple topped the entry facade.

I knew Youngstown was a mix of many ethnic communities, but I knew absolutely nothing about the Welsh community in Youngstown. In writing about Youngstown over the last several years, I discovered that the Welsh played an important role in the development of the coal, iron, and steel industry in the city. David Tod, who opened one of the first coal mines in Brier Hill, employed John Davis to run his mining operation. Davis played a crucial role in recruiting a number of other Welsh immigrants to come to the Mahoning Valley. Welshman William Philpot built the Eagle Furnace in Brier Hill and William Richards, another Welshman managed the operation. By the 1840’s, there was a sizable community living in Brier Hill and elsewhere.

The Welsh are known for their singing. Music festivals known as eisteddfods were major occasions with various choirs competing for top honors. Given the robust Welsh community in Youngstown, it was the home for the first eisteddfod in Ohio in 1860, and the first annual state competition in 1885. St. David is the patron saint of Wales, and Saint David’s Day, March 1, is another time when the Welsh gathered for food and song. The St. David’s Society was formed in 1891 in Youngstown, hosting banquets complete with music and storytelling down to this day. At one time, in the early 1900’s, up to 15,000 Welsh from Youngstown and surrounding areas gathered for annual picnics at Idora Park.

In 1845, a group of Welsh formed a Congregational Church in Brier Hill. The name reflected their history as churches independent of the Church of England in England and Wales. Thomas Evans was their first pastor. In 1861, Thomas W. Davis became the church’s pastor and they built the church I walked past 110 or so years later. It quickly became a center of Welsh community activities. In 1887, the building underwent major reconstruction, essentially in the form it survives in to this day.

The church worshiped at this site for over 100 years. In 1976, the building was sold to the Messiah Holiness Church of God in Christ, who worshiped there until 1997, when a fire resulted in the building being permanently closed. This would spell the end of most buildings, but in 1986, the building was registered in the National Register of Historic Places because of its architecture and community history. It is the oldest church building in Youngstown.

The Youngstown Catholic Diocese now owns the property, wants to preserve the building while re-purposing the space, and has asked Youngstown CityScape, a non-profit involved in beautification and redevelopment efforts in the greater downtown, to move the building. Youngstown CityScape has funds to move the building, which has been deemed architecturally sound for such a move, and are seeking funds to renovate the building, at an estimated cost of $700,000. The problem has been finding a suitable site nearby. Originally, there were plans to move the church building to Wick Park, where CityScape has been engaged in a number of improvement projects. That move has been nixed, and other sites have been proposed from land in the Youngstown Land Bank, to the “Wedge” greenspace near the Steel Museum, to the site of Anthony’s on the River on Oak Hill. A major issue for any location is that the city not be saddled with ongoing costs.

It is not clear at this time what the solution is. One clearly needs to be found soon to avoid further deterioration of the building, necessitating razing the structure. It is a significant part of Youngstown history, representing a community that contributed significantly to the building of the city, and the oldest house of worship in the city. Perhaps it is time for an appeal to St. David…

Sources for this article: