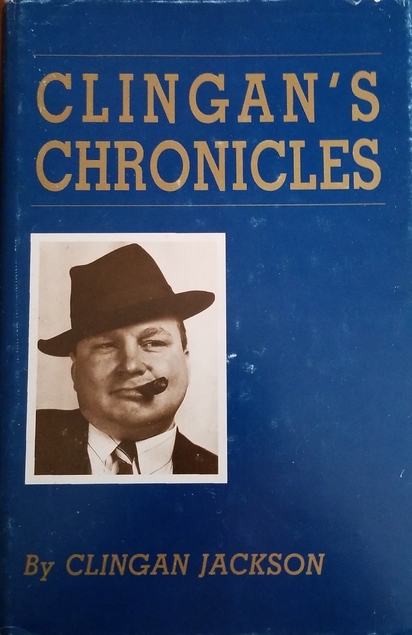 Clingan Jackson, on the cover of Clingan’s Chronicles

Recently, one of the followers of this blog recommended reading Clingan’s Chronicles written by Clingan Jackson. I remembered his columns from when I delivered The Vindicator, and who read him avidly as one of the first eighteen-year-olds to get the vote. I’m in the middle of the book, which is a fascinating combination of memoir, and history of Youngstown and the Mahoning Valley. Particularly its political history.

Clingan Jackson was the long time political editor at The Vindicator. He not only knew the political history of the Valley better than anyone of his time. He helped make it as a State Representative and later State Senator in the 1930’s. In 1950, he finally lost his Senate seat to Charles Carney, who later represented the Youngstown area in Congress. During his time at the State House, he introduced the first strip mining act, and later helped create the Ohio Department of Natural Resources–an environmentalist long before this became a cause. He ran for governor in 1958, losing badly. He also served on several state commissions.

Jackson was born into one of the “first families” of Youngstown. Ancestors, the McFalls, actually lived as trappers on Dry Run Creek (where McKelvey Lake is now located) even before John Young first established Youngstown. His great grandfather, John Calvin Jackson settled in the Coitsville area on the east side of Youngstown in 1804. His grandfather, who served as a Mahoning County Commissioner in the 1870’s and helped engineer the move of the county seat to Youngstown, built the family homestead on Jacobs Road. Clingan Jackson was born on March 28, 1907. He says one of his earliest memories was seeing his father come in on a snowy day to announce the election of Woodrow Wilson in 1912. It was a political family where heated discussion was common and not all agreed.

Jackson’s parents moved around. For a time, they lived across the state line in Hillsville where his father worked at the Carbon Limestone Company. He was allowed to attend Lowellville High School because of his Ohio roots. He joined his brother John at the University of Colorado at Boulder in 1925 and returned to Youngstown after graduation in 1929. He worked at the electric company for a few months and then started working for The Vindicator for $25 a week. His first job was fetching stock quotations from local brokerages, which gave him a first hand glimpse of the panic when the market crashed in October of 1929. He covered the beginnings of the labor movement in Youngstown in the early 1930’s and the Little Steel Strike of 1937. His narrative captures the risks reporters of his time went through to get the story:

“Ed Salt, a Vindicator photographer, and I were dispatched to Poland Avenue to cover the tense situation. It was growing dark by that time, lights were being shot out and hundreds of men were milling along the street. We parked near the fire station and started walking down the sidewalk. As we passed by a bush, we saw its leaves completely eliminated as a shotgun blast rang out. Being a brave man, I went back to the fire station; needing to take pictures, Salt pushed onward.

When I arrived at the station someone exclaimed, ‘Salt has been shot.’ Mustering my courage, I went to his rescue, and found him with his white shirt completely bloodied. I got him into the car, and we headed up Poland Avenue. Although the street was barricaded, I persuaded the pickets to let the car through by explaining I had a passenger who needed to go to the hospital.”

It turns out that Salt was covered with shotgun pellet wounds, none serious.

Part of Clingan Jackson’s column from the September 1, 1968 Vindicator, the Sunday after the tumultuous 1968 Democratic National Convention

He became the political editor of The Vindicator in 1938 and continued in that role until 1983. He covered every president from Roosevelt through Reagan, and the congressional terms of Michael Kirwan, Charles Carney, Lyle Williams, and Jim Traficant. Although a lifelong Democrat, and at times an officeholder, his real fascination was with the practice of politics and he was able to cover Democrats and Republicans impartially. He was one of the pioneers in political polling, and the accuracy of his polls brought him to the attention of George Gallup.

Andrea Wood did a feature for WYTV on Clingan Jackson toward the end of his tenure at the Vindicator, in 1980. It is fascinating to watch him hunt and peck at a computer terminal while chomping on his trademark cigar. He comes across as the classic newspaper man. She later helped him with the editing work on Clingan’s Chronicles.

He retired from The Vindicator in 1983. He went on to contribute a column to the Youngstown-Warren Business Journal into the 1990’s. He passed away on March 26, 1997, two days shy of 90. He joined a number of his ancestors who are buried in the Coitsville Presbyterian-Jackson Cemetery. He was married three times, with two of his wives preceding him in death, Virginia and Thelma (“Billy”). His third wife, Loretta Fitch Jackson owned Loretta Fitch Florist at the intersection of Routes 616 and 422 in Coitsville. He wrote of his three wives, “Good fortune is a necessary element of most any man’s success, and mine was having three farm girls for wives.”