Did you ever climb around the rocks in the Bears Den area of Mill Creek Park? The area makes you wonder if there was a time when a group of giants were tossing the huge boulders at each other, they look so tumbled down.

Maybe your visits were tamer, perhaps hiking a trail along Bears Den Creek or going to a gathering at Bears Den Cabin, having a picnic in the picnic area in the Upper and Lower Meadows, or playing a game of ultimate frisbee on the open field of the Upper Meadow.

I think at one time or another, I probably did all of these things. You probably did as well. Have you ever wondered about the history of this area, where all those rocks came from and how the area developed?

I always thought all those blocks were left by glaciers. I came to discover that the more likely explanation was that as Bears Den Run (or Bear Creek as it is sometimes called) flowed into Mill Creek, it cut through the sandstone, of which the rocks consist to underlying softer layers of shale, undercutting the sandstone until pieces of it collapsed into the creek. Gradually the descending creek cut the ravine we see today. It’s not particularly complicated. It mostly comes down to running water. (From a paper by John S. Petrek, Geological Features in Mill Creek Park Youngstown, Ohio, June 1971, pp. 26-27).

I say mostly because there were industries along Bears Den Run at various periods. Grist and sawmills. Blacksmith shops. And most significant, several quarrying operations, one of which was in the ravine behind Bears Den Cabin (William McKinley was one of the business partners), another, the Jake Stambaugh quarry in the bluff next to the Wick Recreation Area along Bears Den Road. Stone from these quarries were used for bridges over Bears Den Run, the Bruce Rogers Bridge at Birch Hill, the Lake Cohasset Dam, and the Wall Garden overlooking West Drive. 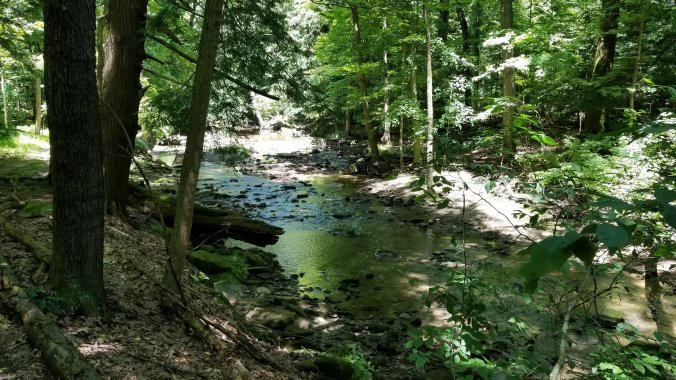 If you look at a map of Mill Creek Park, you readily notice that most of it runs south to north on either side of Mill Creek and the three lakes formed by dams. Bears Den and the Wick Recreation Area to the north jut out to the west from the rest of the park. The park was created in 1891. Volney Rogers continued to acquire parcels, and acquired the Bears Den properties in 1894. However this area was not connected to the rest of the park until 1921 when another 60 acres were acquired in the Bear Creek Valley (the narrow corridor connecting Bears Den with the rest of the park at West Drive) and Bears Den Drive was constructed.

Bears Den Cabin was built in 1931 in the northwest corner of the Upper Meadows. A kitchen was installed in 1960, a parking lot in 1962 and modern lighting in 1963. Pictures on the park website suggest the kitchen and interior has been further updated. The cabin is heated and also has a fireplace but no air conditioning. It can accommodate up to 40 people and be rented by the half or full day ($75 for a half day; $125 for a full day for Mahoning County residents; $100/$165 for non-residents, as of 8/2019).

The name “Bears Den”? At one time there really were bears living in those caves and roaming the ravine. One still hears reports of black bears in other areas around northeast Ohio, so this shouldn’t be entirely surprising,

Finally, about all that climbing around in Bears Den. This actually violates current park regulation 20.6 which reads: “No person is permitted to climb or rappel hillsides or ravine areas on Park District lands.” These regulations were first published in 1989 and most recently amended in 2017. Whether any of this existed when most of us were growing up I don’t know. Certainly none of us knew anything about that. Even the distinguished Dr. John C. Melnick recounts this incident from his youth in The Green Cathedral:

One of the author’s most harassing experiences occurred in Bears Den. Once as a young boy hiking in the Bears Den it was decided to climb up the side of huge boulders. After several of these were conquered, an attempt was made on a very high boulder measuring over 25 feet in height. By use of small hollows in the rock for steps and grasping places, success was achieved for about three quarters of the height when additional footing was lacking. No progress could be made either up or down. In a state of apprehension, help from his friends saved the day” (pp. 145, 147).

Whether it is the placid sound of the running waters of Bear Creek as you walk along side on one of the trails, the rugged beauty of the tumbled boulders in the ravines, or the pleasant picnic areas, the Bears Den area is one of areas of the park that has been delighting visitors over the last hundred years.

15 thoughts on “Growing Up in Working Class Youngstown — Bears Den”