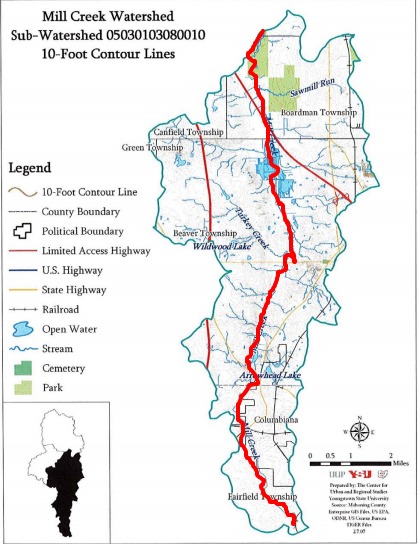 Before there ever was a Mill Creek Metropark, there was Mill Creek. As it turns out, the portion of Mill Creek most of us are familiar with is only the northern half, running from Boardman Township north to Lake Newport, then Lanterman’s Falls and the gorge, emptying into Lake Cohasset, and then running to the south end of Lake Glacier, and from there emptying into the Mahoning River. It got its name from the grist mills built along the Creek. There are several “Mill Creeks” in Ohio.

Mill Creek originates in Columbiana County. For the first forty-plus years of Mill Creek Park, no one knew exactly where the headwaters of Mill Creek were. In 1904, Volney Rogers was finally able to try to search for the headwaters. It was a winter day. He began where Mill Creek flows into the Mahoning River and made it as far as Lanterman’s Falls, no where near Columbiana. In 1921, John H. Chase and his daughter followed the creek into Columbiana County but they were unsuccessful in identifying its source. This was complicated by small streams that flowed in, but weren’t Mill Creek. Finally John Chase and Bruce Rogers, Park Superintendent and brother of Volney, traced the headwaters to a farm owned by William Cope in Fairfield Township on a ridge about 2 1/2 miles south of Columbiana and 20.9 miles from where Mill Creek flows into the Mahoning River. The spring actually started underneath the farmhouse.

Bruce Rogers pointing to Spring by foundations behind the farmhouse. (Ohio Archaeological and Historical Quarterly, April 1934)

A ceremony was held on October 7, 1933 christening the headwaters, attended by a number of prominent local guests with remarks by Bruce Rogers, a poem, and an account of how they reached the determination that this was the origin of Mill Creek, an account later published in the Ohio Archaelogical and Historical Quarterly written by Charles B. Galbreath, who gave the keynote at the gathering. The christening involved water collected from the Bay of Fundy, the Suwanee River, the Pacific Ocean, the Indian River, Crater Lake, and snow melt from Mount Rainier.

In 1965, the farm was sold to Harry Pierson and became known as the “Headquarters Farm.” It turns out that this property lies just south of the Fairfield Township offices. Beginning in 2016, a combination of Boy and Girl Scout projects and township funded work created an observation and seating area that is Phase One of the Fairfield Township Trustees plan to develop the Headwaters Nature Trail. Phase Two, projected to be completed in 2019 involves more trail clearing, bridges, benches and trail marking. 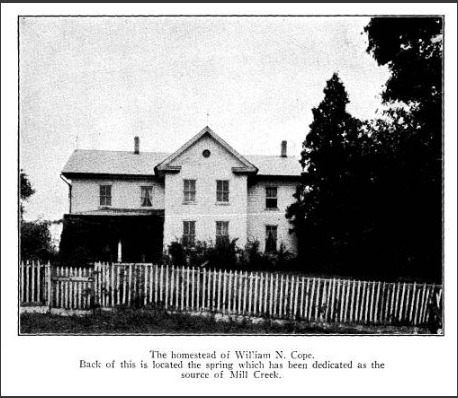 Mill Creek at its origin is 1175 feet above sea level and falls 345 feet enroute to the Mahoning River. According to the Mill Creek Watershed Action Plan the creek cut through a clay and loam layer deposited by glaciers down through the Mississippian age siltstone and shales, and the Pennsylvanian age sandstone and shales, creating the beautiful gorges we know today. There are ten name tributaries feeding Mill Creek and 90 unnamed ones. Ultimately, all the water in this watershed flows into the Mahoning River, which joins with the Beaver River south of New Castle, Pa. and then flows into the Ohio, the Mississippi, and the Gulf of Mexico. It is amazing to think of the journey of that water from a hard-to-find spring in Fairfield Township all the way to the Gulf of Mexico. Equally amazing to me is to think that this little rivulet, joined with small tributaries over millennia cut the beautiful gorges of the park so many of us love.