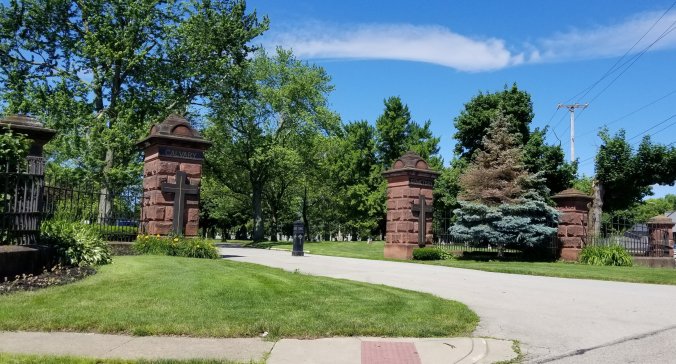 From the time I was old enough to walk to the West Side Library or the Mahoning Plaza, my walk along Mahoning Avenue took me past Calvary Cemetery. Later on, I used to walk along the east side of the cemetery along S. Belle Vista, either when I walked up to the James L. Wick, Jr. recreation area or more frequently, on the way to Chaney High School. Most of the time, I didn’t give it much thought apart from looking at some of the very impressive grave monuments. We used to joke that they needed those heavy stone monuments to keep some of the people in their graves.

I can’t recall that I was in the cemetery until the deaths of some of my wife’s relatives, and of her mother, who died in 1998, and was buried next to her husband, who had died many years earlier. I did not grow up in a Catholic home, and most of my relations were buried at Forest Lawn over on Market Street. Many of my Catholic friends had grandparents, aunts and uncles who were buried there.

Calvary Cemetery is one of four Catholic Cemeteries serving the Diocese of Youngstown. The others are in Cortland (All Souls), Massillon (also Calvary), and Austintown (Resurrection). Calvary is the oldest of these, and the largest. I could not find a figure of how many people are buried at Calvary Cemetery. Find-a-Grave currently lists 20,586 memorials photographed, which they say is 67% of the memorials. This would suggest that at least 30,000 people are buried there, and perhaps more if a memorial remembered more than one person buried nearby, such as a couple. [Since first posting, I heard estimates between 100,000 and 200,000 and learned through a reader that an employee of the cemetery told her 250,000 people were interred there.]

The cemetery was established in 1885 and was also known as Mount Calvary Cemetery. There were two older Catholic cemeteries in the area, the Old Catholic Cemetery known as Rose Hill, and the German Catholic Cemetery, also known as St. Joseph’s Church Cemetery. When Calvary was opened, those interred at these other two cemeteries were moved there, meaning that Calvary includes graves of those who died prior to 1885.

While the list is not nearly as long as the one for Oak Hill Cemetery, where many of the early “pillars” of Youngstown were buried, the cemetery serves as the final resting place of some important figures in Youngstown history. These include:

Calvary Cemetery continues to serve the needs of the Catholic community in Youngstown, although Interment.com indicates that while accepting burials, space is becoming limited. The cemetery is well into its second century as the final resting place for many Catholic residents in Youngstown. May they rest in peace and rise in glory.

19 thoughts on “Growing Up in Working Class Youngstown — Calvary Cemetery”