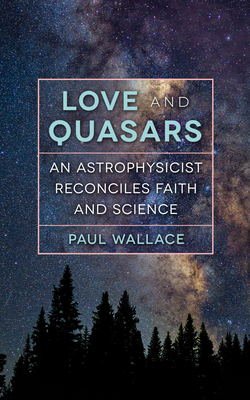 Summary: An astrophysicist recounts both his journey away from faith as he saw it in conflict with science, and his return to a faith enlarged by his pursuit of science.

There are many books that contend that science and faith might be reconciled. What makes this book stand apart is not merely the reasoned argument, but more deeply the wonder and love for both God and the cosmos that brings science and faith together for the author.

It wasn’t always so for Paul Wallace. Like many children, Paul started out with an implicit faith in God and saw God’s glory in the world (the subject of a family joke). Beginning in second grade, he began to see contradictions between what he read in the Bible and what he was learning about the world from science. The religious adults he discussed this with seemed uneasy, the scientists were in love with their work. As he went along, he gradually came to believe that opposing faith to science was kind of like “chessboxing” the mixing of two very different things that each address different aspects of our existence. Faith shouldn’t exclude scientific explanations of origins, and science shouldn’t pretend to answer the questions of what kind of people we ought to be and ultimate questions of meaning.

He argues for the cooperation of friends, indeed lovers, as the model for the relationship of faith and science, both approaching the universe with wonder and love without imposing what each sees on the other, but mutually appreciating and learning from each other, sometimes coming to a seamless union, as in marriage. He speaks about how science may enlarge faith, even while some choose to believe there is nothing more while others grow in faith. He proposes this rewrite to a materialist vision of the universe:

You have a heavenly father. You’re an amazing product of his ongoing creation project. We’ve discovered a lot about that project, which has been going on for billions of years. We are human beings, the descendants of apes, who were drawn from earlier, smaller primates. Our lineage also includes reptiles and amphibians and fish and worms and even single-celled organisms. Like a flower that grows from the dirt yet is not itself dirt, we have been gradually assembled out of chaotic and disorganized elements. You were formed from the dust of the ground, given the breath of life, and carry the image of a loving and creative Father who is crazy about you.

He proposes that this view of science and faith opens us to a larger and stranger God, one who made a vastly more immense universe than anyone before Copernicus imagined, and even stranger than the universe delineated by Newton. He thinks this leads to a larger understanding of the Bible revealing God’s loving relationship to the world he has made rather than strained interpretations that tend to harmonize a literal reading of Genesis with the findings of science. Science reveals a universe “red in tooth and claw” and faith reveals a Christ who enters into violence and suffering and transforms it. He suggests that our problem with miracles may be that we look at such events from a human point of view whereas from God’s perspective, there are no miracles but only possible things.

One of the most helpful chapters is one in which he re-examines the popular view of the church versus Galileo, suggesting that the real history is more complicated and that much of the purported warfare between science and Christianity has been cooked up and is an oversimplification of history. He describes his own journey back to faith as he recognized the limits of science to address life’s big questions of why we are here and our sense of wonder at the beauty we behold in the world. Most of all, faith, and not science revealed that we are creatures of love, a love that embraces people, God and the cosmos that scientists study.

What I appreciate is that Wallace does not try to argue a concordist explanation between the Bible and science. He doesn’t try to argue God from irreducible complexity or fine tuning. He traces his own recognition of the inadequacy of materialist science to answer the deepest longings and intuitions of his life. He recognizes the connection between the wonder and love of the believer and the scientific researcher. He does all this in a manner that is at times disarmingly offhand and at others is caught up in the wonder of the world he studies, inviting us, “do you see it too?” Just as the woman who eventually became his wife didn’t make him an evangelistic “project” but simply entered into a relationship of wonder and love that was instrumental in his return to faith, so he treats the reader. One feels we are not projects but fellow seekers, trying to make sense of our own wonder and love and a longing for making some sense of the world, even as we listen to his personal journey of discovery.

Disclosure of Material Connection: I received a complimentary review copy of this book from the publisher via Edelweiss. The opinions I have expressed are my own.

One thought on “Review: Love and Quasars”