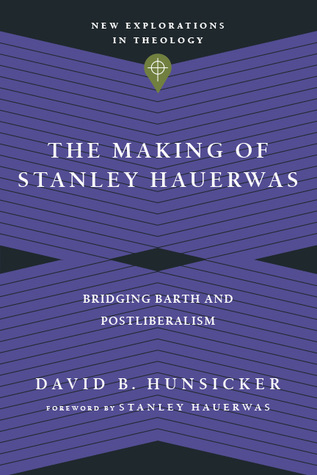 Summary: A study of the theology of Stanley Hauerwas and the apparently contrary threads of being characterized as both Barthian, and a postliberal theologian.

Stanley Hauerwas has been one of the most visible and discussed theologians of the last forty years. His challenging work on the nature of the church, his assertion of the church as a political structure, and his social ethics has evoked much discussion. In this work, David B. Hunsicker focuses on two apparently contrary aspects of Hauerwas theological work–his claim to be a Barthian, and the postliberal character of his theology, focusing on narrative interpretation of scripture and emphasizing ecclesiology instead of Christology.

Hunsicker begins by tracing Hauerwas biography and the Barthian influences in his thought–particularly in rejecting the divorce of theology and ethics, and in rejecting theological liberalism. He then offers a case study of how each of them approached abortion, how both reject natural theology approaches arguing from universal reasons, but how Hauerwas parts in grounding his exploration in ecclesiology and how the church functions in moral formation. He concludes in the first part that Hauerwas was indirectly influenced by Barth, and that his post liberalism expands the idea of what it means to be a “Barthian.”

In part two, Hunsicker considers the claim that Hauerwas learned to keep theology and ethics together from Barth. The discussion revolves around a key difference–Barth’s rejection of a casuistic approach ethics. Hauerwas reintroduces casuistry in his ecclesiological approach but the differences are reconciled in Hauerwas’ narrative approach to Christology, with the ethics of the church formed by its imitation of Christ.

In the final part, Hunsicker takes on the question of whether Hauerwas is more Ritschlian than Barthian in that his use of scripture is sociological rather than theological. Hunsicker contends that while Hauerwas goes beyond Barth in his focus on the church, his theology of the church is consistent with that of Barth. The conclusion includes some of Hunsicker’s ideas of helpful clarifications Hauerwas could make to resolve the apparent contradictions.

One question I wonder about beyond academic curiosity is why this all matters? One of the things this work underscored is the critical connection between Christ and the church, that our encounter with Christ is embodied and lived out through the church into the world. Through the church, we are both formed in Christ and engaged with the world. This work also helps explicate the way Hauerwas departs from liberal theology and the creative tension in his work in its Barthian and postliberal aspects. Finally, it underscores Hauerwas critique that Christian ethics in Twentieth century America was more American than Christian, and Hauerwas effort to recover a church more Christian than American.

One thought on “Review: The Making of Stanley Hauerwas”