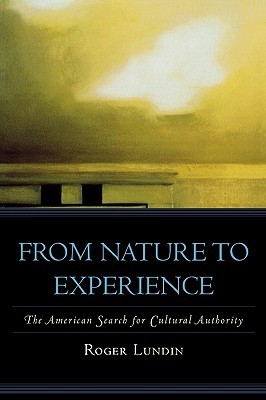 Summary: Using two essays by Emerson, “Nature” and “Experience,” traces the shift in American moral and cultural authority during the last two centuries.

Roger Lundin was an English professor at Wheaton College until his death in 2015. In this work, he left us with a masterful literary and intellectual history of 19th and 20th century America. He structures this treatment around two essays by Ralph Waldo Emerson, “Nature” and “Experience,” tracing the shift in authority from Nature, that is the external world ranging from physical reality to Christian revelation to Experience, the perceptions of the individual know-er.

Lundin traces this intellectual movement through the American pragmatism of Dewey to the post-modernism of Richard Rorty and Stanley Fish. Along the way he engages philosophers like Nietzsche and intellectuals like Henry Adams. He also traces this intellectual shift through the lives of literary figures like Emily Dickinson, of whom he wrote in a separate work, a short story of Stephen Crane, and William Faulkner. And he brings all these in dialogue with Dietrich Bonhoeffer and Karl Barth.

The movement he traces is one from a nature that is enchanted, connected to a transcendent God, to disenchantment, and from a reality and truth rooted outside oneself to subjective glimpses of reality and truth reduced to what works. I’ve probably stated this summary far more polemically, and with less nuance than does Lundin, who shows a deep acquaintance with and respect for the intellectual and artistic power of each of these figures, with whom most of us, including this reviewer have a passing acquaintance. For that reason, his invoking of Christian sources, and the transcendent vision of authority they represent, comes off as careful scholarship and rigorous argument rather than polemics or proselytizing.

What Lundin does instead is model Christian scholarship at its best, of engaging the minds of one’s discipline with a thoughtful Christian mind. He also offers more. In a culture suspicious both of science and anyone else’s claims of truth, and an academy witnessing the self-inflicted eclipse of the humanities, Lundin’s discussion offers hope for the retrieval of the sources of authority lost to academy and society alike. Sadly, this work, still in print, does not enjoy the circulation it deserves. My own search to find the book in our state’s libraries only turned up a single copy. Perhaps calling renewed attention to Lundin’s work may both serve as fitting tribute to his scholarship, and invite a new generation to take up his work.

One thought on “Review: From Nature to Experience”