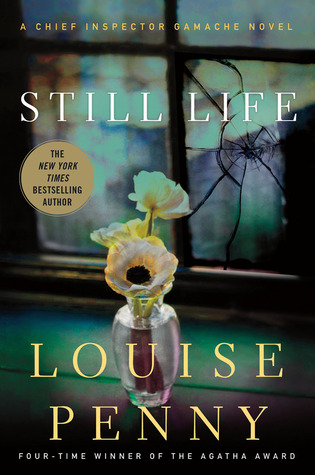 Summary: The suspicious death of Jane Neal a day after her painting is accepted into an art show brings Gamache and his team to Three Pines, and to the grim conclusion that someone in this small community is a murderer.

Jane Neal was an elderly retired teacher, seemingly beloved by everyone in the secluded town of Three Pines, near the Quebec/US border. Everyone had heard she was an artist. Yet no one had been allowed beyond her kitchen or saw her work. That is, until she entered a piece into the local Arts Williamsburg show–a painting called Fair Day. At first the jurors thought it was a child’s drawing, but then felt there was a peculiar power to this piece. When Jane learns the painting was accepted, she invited all her friends to a party the night of the show opening, at her house–Olivier and Gabri, the gay couple who owned the Bistro, Myrna, the bookstore owner, Ruth Zardo, the brilliant and curmudgeonly poet, Clara and Peter, an artist couple, and Ben Hadley, a bachelor artist whose mother Timmer had recently died after a battle with cancer.

The next morning Jane was found dead in the forest by Ben Hadley. She died of an arrow through the heart, an arrow removed. And so Chief Inspector Armand Gamache and his team discover Three Pines. At first the investigation appears to indicate a hunting accident, perhaps from a hunter from away who thought he had spotted a deer. Then a troubled youth, or his father. The youth had been part of a group throwing manure from a flower bed at Olivier and Gabri, mocking them for being gay. Jane, on the morning before she died yelled at them to stop. Suspicion then turned to Yolande, Jane’s niece, who thought she would inherit Jane’s estate, or her uncouth husband or son. Eventually the focus turns to those in the cafe who had received Jane’s invitation. Among these people, all of whom seemed friends, and friends of Jane, there was a murderer.

While Gamache and his core team of Jean Guy Beauvoir and Isabelle LaCoste work together as a well-oiled machine, a new agent, Yvette Nichol, the daughter of immigrants, tries so hard to succeed on her first assignment that she fails to listen to Gamache, follow through on leads, and asserts herself where she is not welcome. Gamache, after much effort, must send her home. Yet her insights do move the investigation forward, leaving us wonder if this is the last we will see of her.

I picked up one of the books of this series (#10), loved it, and was told by others who like Penny’s work that I had to go back to the beginning. So I have, and I would say it was worth it, and I intend to go on. Penny has created a lovable mix of townsfolk and an investigative team. Gamache is the classic detective, seemingly slow at times, who watches, listens, and thinks, and tries to cultivate these virtues in others, including Nichol. There is a winsome integrity about him, typified in his willingness to accept a suspension rather than arrest a man he considered innocent.

I have encountered many who wish Three Pines was a real town, a place of rural beauty and rich local culture. In this book, we learn the reason for the name. We also discover for all its beauty and seemingly serene atmosphere, it is hardly a place of still life. Penny reminds us that deep within people we think we know, there are hidden depths, and hidden secrets, that sometimes blossom into exquisite beauty, or the most terrible acts. In words quoted by Jane from W.H. Auden the night before she died:

Evil is unspectacular and always human,
and shares our bed and eats at our own table.

Or in words on Jane Neal’s mirror, words Agent Nichol did not yet understand, “You’re looking at the problem.”