The Canfield Fair is next weekend!  I thought I would take the next two weeks to talk about Fair memories, focusing on food this week and general fair memories next week. By the way, for those of you not from Youngstown, the Canfield Fair is the county fair for Mahoning County. It is held in Canfield, the original county seat of Mahoning County before Youngstown’s explosive growth under the influence of industry and immigration. It is the largest county fair in Ohio and among the largest in the country. If you want to go to the quintessential county fair, this is the one to go to.

My first food memory of the fair was when my dad bought me a footlong hot dog. I never knew that hotdogs could be so long and I was in hotdog heaven. It was at the fair that I discovered this wonderful thing called Elephant ears, the perfect snack to munch on as you walked along the midway that you could share with your friends. Along with the wonderful tastes, there was the delicious mix of smells as you walked along the aisles of food vendors and smelled the ribs and barbecued chicken, and of course the Italian sausage stands with all the peppers and onions frying alongside.

Our family made an annual pilgrimage to the fair through most of the years my son was growing up, and when he became old enough, it became a father and son ritual to get our DiRusso’s Italian Sausage sandwich slathered with peppers and onions as soon as we could after we got to the fair. To eat a DiRusso’s is in some ways to celebrate the very best of Youngstown. DiRusso’s stands appear all over the country at fairs and their sausage now can be purchased in stores throughout the midwest including stores near our home. DiRusso’s manufacturing plant and offices are located in the heart of Youngstown, not far from a spot once occupied by steel mills. It represents the rich heritage of good Italian food to come out of Youngstown’s Italian community. 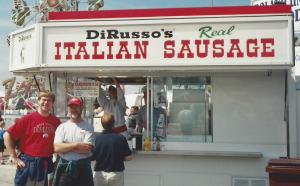 Father and son at DiRusso’s

We had a strategy of eating our way through the fair! Usually you had to chase the DiRusso’s (or a gyro in my wife’s case) with a greasy serving of fries sprinkled with malt vinegar. Then you stopped for your first lemon-shakeup, which was so refreshing on those late summer afternoons at the fair. Sure, the kids did rides and you looked at exhibits (more on this next week), but you were always thinking about what you were going to eat next–at least that was true with the crowd I went with. At some time in the day we would stop at the Parker’s Ice Cream stand (I believe that was the name). We had friends who worked there, and it was really good ice cream! Or we would stop at Lord of Life Lutheran’s Apple Dumpling stand. There were several churches that served barbecue chicken dinners and often later in the day we would make for one of these, usually run by an African-American congregation whose name I cannot recall.

By evening you were stuffed but the one nice thing about the fair is that you could walk it off while noshing on some kettle corn, or another lemon shake if you were thirsty. Sometimes we would pick up fudge at one of the fudge stand to take home to parents, when they were still living in Youngstown. As you walked along, you realized that you could come back every day and eat a totally different selection of food. I haven’t even scratched the surface of all you could find–steakburgers and stromboli, egg rolls and dippin dots, cotton candy and funnel cakes. This “Best of Fair” website gives a pretty good idea of the various concessions you will find.

What were/are your favorite fair foods (this goes for any fair, but especially the Canfield Fair)?