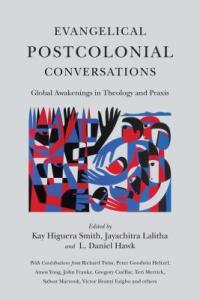 In 2010 Gordon College hosted a roundtable chaired by Joseph Duggan, a pioneer in applying postcolonial concepts to theological conversations. This, in turn, led to the second roundtable and the papers that form this volume. Postcolonial theory has developed a set of constructs to describe the power relationships that prevailed during imperial/colonial eras, and the reframing of those relationships necessary in the postcolonial era.

What is ground-breaking about this book is to put the concepts of “evangelical” and “postcolonial” in the same title and to conceive of them in conversation. What this involves is a willingness to face evangelical complicity in subjugating colonized peoples, including in some cases attempts to assimilate, marginalize, or even destroy (as is the case with our Native American population) those peoples. We often want to argue that we were not “those” people, and yet to begin to engage the formerly colonized in the Majority World means both to face this past and to appreciate the full dignity and cultural riches of these peoples who help us glimpse new facets of the diamond of evangelical convictions outlined in this book as christocentrism, communitarianism, conversionism, charism, textualism, and activism.

The editors give, perhaps, the best summary of the content of the book:

“The conversation begins, in part one, with an interrogation of evangelical missions and the grand narratives that articulate/d and legitimate/d the missionary enterprise. Part two then exposes the racial and national ideologies that configured the grand narratives. As steps toward rectifying these and other colonial/missional metanarratives, the authors in part three revision evangelical theology in a postcolonial key, and those in part four revision evangelical practices and praxis. The conversation in part five circles back to an account and self-critique of the Postcolonial Roundtable, which generated this conversation, and ends with words of hope” (p. 27).

A number of the chapters in this work themselves represent a conversation, being co-written, in many cases by someone from a Western background and someone from the Majority World. For example L. Daniel Hawk describes this history of white colonial practice and mission with Native Americans and then Richard Twiss, a pioneer in developing Native American indigenous theology describes his own theological journey of resisting colonial influences and re-visioning evangelical belief in the cultural expressions and practices of his people. Victor Ezigbo and Reggie Williams explore the importance of developing an African Christology that focuses on Christ the revealer, rather than a western, “white” Jesus. Similarly, Joya Colon-Berezin and Peter Goodwin Heltzel contend that a christology that utilizes the concept of hybridity (Jesus/Christ) rescues Jesus from western, White imperial images, and emphasizes both his humanness as part of a subordinated people, as well as his divinity.

Perhaps as illuminating as any of the essays was the final section and the self-critique of the roundtable and the challenges even these individuals steeped in postcolonial thinking had in fleshing out postcolonial evangelical praxis in their own community. Learning to hear the non-Western, non-male voices was the challenge one might expect. Developing a spirituality of prayer was more something given lip service to than practiced. Understanding how white privilege made it easier for white participants to share personal experiences than Majority World participants, whose experiences were often painful reminders of demeaning subordination, was a critical awareness that developed during their dialogues.

If there was one critique I could make, it has to do with the terminology of postcolonial conversation. Terms like metanarrative, subaltern, hybridity, praxis, and even the term postcolonial can use defining. Familiarity with postcolonial discourse was assumed. The careful reader who pays attention to context can learn how these terms are being used but either an introductory essay on postcolonial analysis that introduced the terminology of the field, or at least a glossary might have been helpful. While I understand any field of discourse having its unique terminology, if the aim is the kind of radical inclusiveness aspired to in these conversations, some form of induction into the language of the discourse is important as a form of hospitality (in the self-critique, it appears that even some members of the roundtable had problems with postcolonial language and concepts).

That criticism aside, this work is to be commended for beginning an important conversation that comes to terms with the unseemly elements of the colonial past (and sometimes present) and affirms the cultural identities and theological and practical contributions of majority world believers. The model of the Postcolonial Roundtable, and even the transparency of its self-critique are something from which any who are involved in similar conversations can learn.