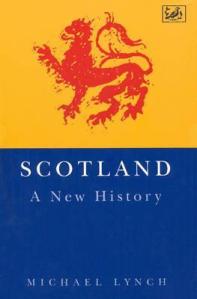 Summary: This one volume work provides a comprehensive overview of the history of Scotland from the Roman invasions, through the kingdoms of the Picts, the Wars of Independence, the rise of the House of Stewart, the Treaty of Union in 1707, the commercial and intellectual zenith of Scotland in the late 18th/early 19th century and its continued efforts to define its relation with the U.K down to the time of writing in 1992.

Despite my name, part of my ethnic heritage is Scottish but until picking up this volume, I had never read a history of Scotland. The closest I’d gotten was to read a biography of Robert The Bruce, who led Scotland to victory in Bannockburn in 1314, regaining Scotland’s independence. Despite my love of history, I knew little of Scotland’s history and Michael Lynch’s well-researched and meticulously documented one volume history amply redressed that balance, spanning twenty centuries over 450 pages.

Lynch begins with the Roman invasions and the resistance of the Caledonians leading to the building of Hadrian’s Wall and the Antonine Wall to control the restive clans. He traces the Gaelic influences on these tribes and the gradual formation of the kingdom of the Picts from the petty kingdoms in the sixth century. He traces the great kings from David I through Alexander III who provided a period of stability and growth of the towns in the 12th and 13th centuries. Then there was the period of the Wars of Independence including the “braveheart” resistance of William Wallace until Robert the Bruce’s victory at Bannockburn secured Scotland’s independence from England in 1314. War continued and the Bruce line gave way to the Stewarts culminating in the reign of James VI who also inherited the throne of England as James 1 in 1603 (the King James of the King James Version of the Bible). This union of two states in one king led, after much turmoil in the 17th century to the Treaty of Union in 1707..

The next couple of centuries marked a time of great intellectual and commercial flourishing in Scotland including the development of shipbuilding in the Clydeside yards. Edinburgh became a center of intellectual luminescence giving us the likes of Adam Smith and Thomas Reid among others. The 18th century was not without uprisings as “Jacobites” contested the Union while various parties wrangled for ascendancy in the Protestant church, and Highlanders were expelled from their lands in “Clearances.”. Two wars in the 20th century led to periods of great prosperity followed by great depressions, and continuing Labor advocacy as well as pressures for an independent Scotland (most recently in 2014). The book closes with the new prosperity coming from North Sea oil revenues.

It would seem that the challenge of writing Scottish history is all the cross-currents one must deal with: Highlands vs. Lowlands, conflicting clans, Catholic and Protestant, Labor and Landowner, independence vs union. Lynch covers it all with admirable thoroughness, which is both the strength and weakness of this history. Various periods, and developments of commerce, politics, and the church are covered in turn. Yet what is lost at times is the sense of a narrative. To deal with varying factions and developments, he will often go back and forth in time over a century or more and explain various developments in careful detail. What also seems apparent is that he assumes some basic knowledge of the contours of this history, the geography of Scotland and even some terminology–likely not problematic for a native, but for Americans like me trying to understand our heritage, a bit confusing and daunting at times.

However, read map in hand and a basic timeline in front of one, this history certainly fills out the story in a comprehensive way that it appears no, or few other authors have attempted. The extensive footnotes and bibliography give the person who wants to explore further ample resources. One hopes that this work might be brought up to date, with perhaps a few more aids including more detailed maps and perhaps a glossary of terms, and maybe some judicious editing. The history of this people is full of narrative power and pathos and should not be overshadowed by the other “kingdoms” that make up the United Kingdom.