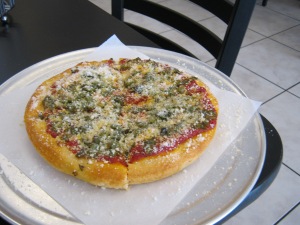 We were out to Xenia on Wednesday, and on the way back stopped to get a Brier Hill pizza from Wedgewood Pizza in Grove City. With the closing of Belleria’s store in Columbus, this is one of the few places left in the capitol city where one can get a Brier Hill pizza and probably the most authentic since the owner uses the same recipe as Fernando at the Austintown Wedgewood. [Since this post was first written, Wedgewood Pizza has closed its Grove City Store.]

Brier Hill pizza, like cookie tables, is a Youngstown original. It gets its name from the Brier Hill neighborhood, which became Youngstown’s “Little Italy”. The growth of the steel industry and the siting of blast furnaces nearby drew immigrants into this neighborhood, located on the western edge of the lower north side of Youngstown.

According to Wikipedia, Brier Hill pizza arose from a homestyle recipe influenced by the Basilicata region of Italy (located in the “instep” of Italy). Brier Hill pizza, like all good Youngstown pizzas, is based on a medium-thick crunchy, rather than doughy, crust. What makes it distinctive is that it is topped generously with a sweet and thick meatless “Sunday sauce” tomato sauce, bell peppers that add a tangy flavor, and Romano rather than mozzarella cheese. And that is it.

Saint Anthony of Padua Church [link includes a nine minute feature by Casey Malone of pizza-making at St. Anthony’s] in Brier Hill has probably done more than anyone else to promote the Brier Hill pizza. Every Friday, a team of church volunteers will make up to 300-400 pizzas for local residents that include original or sausage or egg pizzas either mild or spicy (spiced with peppers from Monsignor deMarinis’ garden). Locals need to order early to ensure getting what they want. Here is a video of the St. Anthony’s folk taking you through the process of pizza-making:

Brier Hill pizza as we know it today may very well have its origins in the recipes the women of St. Anthony’s used to come up with their pizzas. Given the meatless character of the pizza, my guess was that Brier Hill pizza arose out of the Depression era when everyone survived on their gardens with peppers and tomatoes as staples and leftover dough from breadmaking in outdoor ovens. This YouTube video interview (part of the Steel Valley Voices project) with Fred and Josephine Ross confirmed that suspicion and the working class origins of this unique item of Youngstown cuisine. [After posting, a couple people commented that the meatless pies were made on Fridays, which would have been meatless days for Catholic households.]

Now, practically any pizza shop in Youngstown, or with connections to Youngstown, will sell you a Brier Hill pizza. Looking to do it yourself? Here is one recipe I found online. There is also a recipe in the first volume of Recipes of Youngstown. But my hunch is that to discover the real deal, you have to get a pizza from St. Anthony’s or at the Brier Hill Festival, which will be held this year August 14-17. Maybe this will be the year we get there! Whether we do or not, one thing I can say: no one makes pizza like Youngstown pizza makers, and there is nothing like a good Brier Hill pizza!

Youngstown friends, who do you think makes the best Brier Hill pizza?