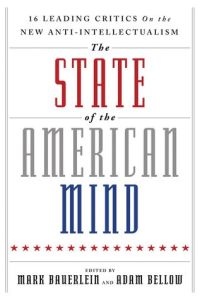 Summary: The contributors in this volume chart the factors contributing to and consequences of what they see as a declining intellectual life in the United States.

In 1987, Allan Bloom expounded upon what he saw as The Closing of the American Mind. This volume, in a cover reminiscent of the former book carries that exposition forward by nearly thirty years. If anything, it appears in the minds of these contributors, we have only gone from bad to worse, as the editors state in their opening essay. This volume seeks to delineate in a more empirical fashion the contours and consequences of such a decline with recommendations of some remedies along the way.

The book is opened by E.D. Hirsch, the author of Cultural Literacy on what America needs to know. This essay essentially restates his thesis that critical thinking and problem solving skills are not enough but that a certain basic cultural literacy of the ideas and currents of thoughts that have shaped one’s culture are essential in the formation of young minds.

Three sections of essays follow. The first seeks to chart the decline of intellectual life. Mark Bauerlein opens this section by documenting the curious problem of increasing IQ scores coupled with decreasing ACT scores, particularly verbal scores, attributing this to an isolated youth culture with its own language. Daniel Dreisbach argues for the importance of biblical literacy and the dearth of it in the current generation. Gerald Graff looks at writing and contends that there needs to be a greater focus on argument rather than the complicated rubrics used in many writing programs. Richard Arum looks at the lack of intellectual development among college students. Robert Whitaker describes the rise of the prescription of psychotropic drugs for children and adolescents following the release of DSM III by the American Psychological Association in 1981, treating many behavioral and mental disorders as physiological illnesses amenable to treatment by these drugs.

Part Two describes the personal and cognitive habits of intellectual life. David T.Z. Mindich explores the decline of quality news coverage with the rise of the internet and the tuning out of the news among the young. Maggie Jackson discusses the need for slow, careful attention in an age where we think we can absorb what we need to know in a glance. Jean M. Twenge explores the rise of a “me centered” generation that is less interested in wider civic and intellectual life. Finally Jonathan Kay explores the dark side of conspiracy theory fascination on the internet, although he finds some hope in vehicles like Wikipedia. Yet he chillingly describes marriages where a spouse watches a husband or wife become absorbed in conspiracies, losing them to the real world.

In Part Three, contributors consider the national consequences of this intellectual decline. Nicholas Eberstadt remarks how we have simultaneously reached a peak of prosperity and an unprecedented entitlement state where half the country is receiving some form of government benefit. Ilya Somin explores the political ignorance of a country where 42 percent of our people cannot even name the three branches of government and 44 percent in 2013 were unaware that the Affordable Care Act was still in existence. Steven Wasserman, a former L.A. Times book critic chronicles the contemporary aversion to “the difficult”, any argument or intellectual endeavor requiring sustained and rigorous attention. Both Dennis Prager and R.R. Reno describe a society where feeling and the Empire of Desire rules over reason and moral law. Greg Lukianoff, who works with the Foundation for Individual Rights in Higher Education (FIRE) describes of the “expectation of confirmation” rules discourse in universities, where it becomes unsafe to hold views that dissent from the prevailing orthodoxy.

There are many aspects of the cumulative case these contributors make that are convincing. The substitution of sentiment for substantive argument, the inability to engage in reasoned discourse, the erosion of cogent writing skills, the decline in serious reading, and a lack of understanding of the great ideas and shaping influences that have made our country what it is, all seem self-evident. If anything, in light of recent concerns about trigger warnings and safe spaces and speech, Greg Lukianoff’s critique of university life seems generous in some ways.

I have two critiques of this work. One is that it is a collection of articles by writers on the conservative end of the spectrum. There are liberal thinkers who are also deeply concerned about the erosion of intellectual life in the country and a discussion among them would truly have been interesting, and could have modeled the substantive argumentation and civil engagement of people who differ.

My other critique is that what they are describing is a culture in decline, and yet what I felt they provided were what many would consider unwanted bandages that fail to address the deeper malady, which I would contend is one of spirit. It is fascinating to me that the intellectual flourishing that produced the American Experiment was preceded by major religious awakenings in the country in the early eighteenth century. I wonder whether an intellectual renaissance can occur without a spiritual awakening of religious institutions that are culturally captive to the same factors the authors describe of the wider culture.

The authors conclude with the hope of another cultural revolution of intellectual life and engagement. What I hope they will give themselves to is exploring the roots of the love of learning, the sources of a broader vision of life than one’s own desires, and the dispositions of radical commitment to human dignity and community that makes discourse across our differences possible and effectual. That indeed would be to “light a candle rather than curse the darkness.”

2 thoughts on “Review: The State of the American Mind”