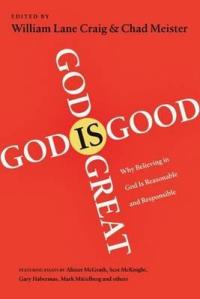 Summary: This collection of essays provides thoughtfully reasoned responses to the leading challenges to Christianity posed by the New Atheism.

Since the time of the publication of this collection of essays, the attacks of the New Atheism upon Christianity have abated somewhat. Christopher Hitchens is no more upon this earth. Perhaps this movement has come to a growing self-awareness of its own hyper-fundamentalism and intolerance, and some of its own tendentious claims.

This book was written at the height of these attacks and provides intellectually rigorous responses helpful both for engaging conversations with atheists, and to bolster the faith of Christians who might have been shaken by some of the accusations of the New Atheists.

The first section of the book, “God Is”, deals with responses that no reasonable person could believe in the existence of a God. William Lane Craig directly addresses the arguments of Richard Dawkins against the classic arguments for God’s existence, pointing out weaknesses in all his arguments, and particularly in his argument against the teleological argument, evident in the fine-tuning of the universe. J. P. Moreland then proceeds to show how theism better explains the nature of human beings than a scientific atheism. And Paul K. Moser lays out the argument for the morally perfect God of Christian theism.

The second section turns to the greatness of God, evident in the finely tuned universe of physics, according to John Polkinghorne, the complexity of biological life as described by Michael Behe, and not confuted by evolutionary explanations of religion. Those using the material by Behe may want to familiarize themselves with the criticism of Behe subsequent to this essay and his response.

The third part of the book considers the goodness of God, responding to New Atheist critiques of the goodness of God and the existence of evil (Meister), the contention that religion is evil (McGrath), that the Old Testament laws and its lawgiver are evil (Copan) and that the idea of God and the existence of hell are irreconcilable (Walls). For those who want a distilled version of Copan’s lengthier treatment in Is God a Moral Monster?, his chapter in this book is a good, concise summary of his arguments.

The final section explores why all this matters. It begins with Charles Taliaferro’s essay on revelation, and the reasons one might seek to look through the Bible to see what it reveals of God. Scot McKnight gives us an overview of the Jesus we might never have met. One of the most interesting essays is Gary Habermas on the resurrection and the evidences for the resurrection claims being well established within weeks or months of the event, as well as written down in Paul’s letters within twenty-five years. Lastly, Mark Mittelberg speaks of the importance of a faith response to Christ.

The book closes with an interview between Gary Habermas and Anthony Flew, chronicling Flew’s journey from atheism to theism and a review of The God Delusion by Alvin Plantinga, demonstrating that Dawkins never sustains his claim that belief in God is the result of delusion. These two pieces alone, along with Habermas on the resurrection, make this book worth the price of admission.

This is a useful resource for someone talking with an atheist friend posing substantive questions, or, as I mentioned above, for someone troubled by some of the challenges to faith (none of which are really “new”) that the New Atheists have posed.

2 thoughts on “Review: God is Great, God is Good”