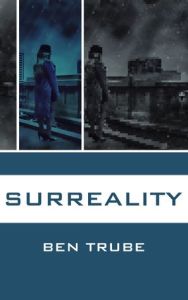 Summary: The murder of Franklin Haines in virtual reality is paralleled with the real theft of $80 million from him. A prostitute is missing, a deadly gang that operates in both cyberspace and the real world threaten murder and mayhem, and Detective Dan Keenan, his real world and virtual world partners and a penguin named Tux work together to find the real criminal behind this web of crime.

Surreality is a virtual world where dreams can become reality, whether a re-created library of Alexandria, a casino named Arcadia, or darker enterprises for pleasure or crime or both. The book begins with the opening of the casino literally created before our eyes out of cherry blossoms that coalesce into an art deco masterpiece. Entrepreneur Franklin D. Haines celebrates this great business enterprise as a hint of the future grandeur and opportunity available in Surreality, until his avatar is fatally strangled and the whole edifice collapses, even while $80 million is drained out of his real life accounts. During all of this, an accomplished virtual madame disappears, as does her real life counterpart.

Because Franklin Haines lives in Columbus, Ohio, Columbus Metro Police Department Detective Dan Keenan is called off of administrative leave by his boss Tom Daily to investigate the case. Keenan is damaged goods, having shot in an alleyway a maniacal murderer by the name of Sinclair who was wielding a knife. He has a hard time shaking the nightmares and memories of that night and wonders if he has a future. Daily gives him this case with the hopes it will get him back on his feet and working again with his partner Sonya Caliente. His first assignment is to learn about Surreality, where he discovers he has another partner, Synthia (Synthetic Intelligence Algorithm), kind of an edgy Siri who looks great in a red dress. And as he begins his virtual investigations, he is soon joined by an expert hacker, Tux, whose avatar is a penguin.

Things get more complicated. Tux introduces Keenan to the nefarious Polos (Power Lords), mostly internet thugs and identity thieves who have also set up shop in the nether worlds of Surreality. Meanwhile, an attempt is made on Haines life in physical reality, where he dives in front of his elegant wife, Katherine Haines, saving her life while getting wounded. A possible suspect, Dr. Glassner, the promoter of the Alexandria Library collecting the world’s knowledge, is also virtually murdered and robbed. It turns out that Glassner and Haines played the leading roles in developing Surreality, falling out over whether it would be a center of culture or commerce. Caught between these two is Katherine Haines, also a programmer, the step sister of Glassner and wife of Franklin D. Haines.

Those are the main characters, besides Keenan’s lovable dog, Garfunkel. Keenan, Caliente, Synthia and Tux work together as the plot weaves back and forth between Surreality and Columbus. Columbus natives will enjoy references to Jack and Benny’s the “Dube”, the Athenaeum, Goodale Park, and the Ohio Union. Geeks will enjoy the visual rendering of how “infected code” works in a virtual world. I found myself intrigued wondering how all the plot strands would come together–who was behind all this stuff? As Keenan investigates this case, he comes face to face, and struggles with, the ghosts and memories of his confrontation with Sinclair

For the most part, the plot moved along and drew me in. There were a few sections, particularly at the beginning when the technical description seemed to slow things down. This book is classed on Amazon as a “technothriller” and it seems that a certain amount of technical explanation was necessary to establish the plausibility of the technical parts of the plot. This is facilitated with a main character, Keenan, who was pretty clueless when it came to computers, and by Synthia, whose attitude made it all a bit more fun.

I found myself liking these characters, even the virtual ones, who I discovered from the ending, may live on in future installments in this series (this is marketed as Volume 1 on Amazon). And I enjoyed the imaginative descriptions at various points such as the creation of a casino out of cherry blossoms at the beginning, the transport tunnels to different parts of Surreality, and the scene where Tux and Keenan have to successively hop their way across nine lanes (data streams?) in an attempt to rescue Ms. Klein, the madame.

Also, without getting ponderous, the book gave a thought-provoking portrayal of all the contradictions we find on the internet and other online media–this place that simultaneously gives us access to incredible volumes of knowledge, every form of commerce, as well as the darker sides appealing to every form of desire and the dubious and criminal activities of the “dark net.”

All in all, a good read that met my basic good read test–did it keep me up at night. It did, and I finished it over a weekend.

Disclosure: While I paid for the e-book that I used for my review, I should disclose, for those who haven’t figured it out, that the author is my son. I won’t claim to be an impartial reviewer in this instance, but I hope I’ve given you enough to decide if this is something you might like. Well done, Ben!

One thought on “Review: Surreality”