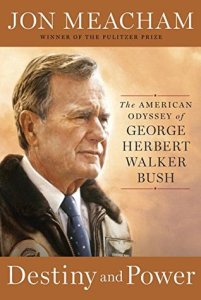 Summary: Meacham traces the life of our 41st president from his family’s roots and values that shaped a man both deeply committed to service and country, and also highly competitive and ambitious. The biography traces both his skillful leadership in handling the transition from the Cold War era, and the inability of this deeply private man to communicate his deep care for and desire to serve his country that cost him a second term.

Reading this biography suggested to me that George H. W. Bush is perhaps under-rated both as a president and a person. For many, he is regarded as an asterisk between the Reagan and Clinton years. And yet, as President, he skillfully navigated the nation in international relations at the end of the Cold War era that avoided provoking hard-line reactionaries in the former Soviet Union, facilitating the reunification of Germany, the freedom of Soviet satellites from Communist domination, and the establishment of warm relations between the U.S. and Russia. He built an international coalition to decisively defeat Saddam Hussein’s invasion of Kuwait and bring relief to the atrocities against Kuwaitis, containing Hussein without becoming embroiled in another “Vietnam”.

While growing up in a privileged New England family, he was a genuine war hero, surviving being shot down after a bombing run at Chichi-Jima. Before going off to war, he married Barbara, beginning a lifelong partnership between two very strong individuals. They experienced tragedy that deepened their compassion early in marriage, losing their daughter Robin to leukemia. They built their own fortune in the Texas oil industry of the 1950s. He served in the U.S. House of Representatives, then lost a Senate race in 1964 in the midst of Lyndon Johnson’s landslide victory over Barry Goldwater. Subsequently, he served in Republican party leadership, as U.N. ambassador, our ambassador to China and as C.I.A. director.

There was the complicated relationship with Ronald Reagan. Losing to Reagan after a promising beginning in Iowa, criticizing Reagan’s age and “voo-doo economics” he is selected as running mate, despite Nancy Reagan’s opposition. He turns out to be the ideal Vice-President who becomes a trusted friend by never stealing the limelight, and is asked by Nancy to give Reagan’s eulogy, which he did paying tribute not only to Reagan but to Nancy.

The drive for success, for power accounted for the weaknesses and flaws in his story–compromised positions on civil rights in the early years, the Willie Horton ads in the Presidential campaign, the famous “read my lips” promise that he broke when it became clear that only additional tax revenues could address the nation’s fiscal problems in the early 1990’s. Meacham explores the drive in his character that led to these compromises. At the same time, we see a president willing to do what he saw in the best interests of his country even though it contributed to his loss of the presidency, ironically laying the groundwork for budget surpluses in the Clinton years. We also see a very private man torn by the political necessities of glad-handing, wearying of the process in the 1992 election, outshone by the young Democrat from Arkansas.

As impressive as anything else is the life he lived after his one term presidency. He kept a low profile and eventually became good friends even with Bill Clinton, as the two former presidents worked on tsunami relief. Meacham writes about his relationship with his presidential son and there is no evidence of the father second-guessing the son, even on Iraq. He dismissed comparisons on this score with the response that these were different circumstances, different wars. Rather the relationship was one of pride and support, allowing the son to be his own person and only offering counsel when asked. Generally, he was generous with his words even of political foes. The few exceptions: Donald Rumsfeld (always a rival) and Dick Cheney, whose vice-presidency Bush 41 criticized after the fact.

Years earlier, I read Kevin Phillips American Dynasty, which is a much more sinister view of the Bushes as an inter-generational political dynasty. His account and Meacham’s are very different. Perhaps it was the fact that Phillips book was written during the height of criticism of Bush 43’s Iraq policies just before the 2004 elections. This seems a much more measured appraisal and a pleasure to read. It presented a man of both great ambition and generally high principle as well as one far more decent than he was given credit in his 1992 defeat. While acting in his own best political interests at times, what was more striking were the times he acted in service to the country, even at the expense of his own interests, whether as CIA director, vice president, or in the 1990 budget deal raising taxes. I was struck with how fortunate we were to have one with his foreign policy skill at the denouement of the Cold War. While his presidency is still in the recent past and will be subject to continuing discussion, Barack Obama’s assessment on awarding the Medal of Freedom to George H. W. Bush in 2010 may be the most fitting:

One thought on “Review: Destiny and Power”