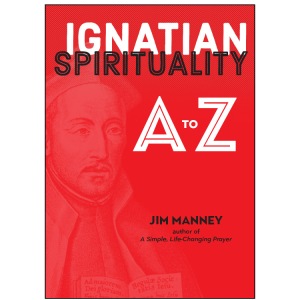 Summary: An introduction to Ignatian spirituality in the form of a glossary of commonly used terms and key people.

Ignatian spirituality has been gaining in interest in recent years. Pope Francis, a Jesuit, is steeped in this tradition. The hunger for a deeper spirituality extends far beyond Catholic circles and it is increasingly common to encounter some of the practices of Ignatian spirituality like examen or terminology like consolation and desolation in many retreat setting. Or you will hear of some who has done the spiritual exercises. It can all sound a bit like “inside baseball,” an experience author Jim Manney had. He looked for a guide that explained or defined these terms, and ended up writing it.

Manney has compiled an “A to Z” glossary of terms related to Ignatian spiritualty that includes history and biography of key figures from Ignatius, Xavier, and Peter Faber down to Fr. James Martin, Teilhard de Chardin, and Pope Francis, all Jesuits We learn the connection between the Society of Jesus and Ignatian spirituality. Manney has fun along the way. One of his entries is “Basketball,” highlighting the long tradition of outstanding Jesuit college teams, players, and coaches. He writes:

“Why this digression into basketball in a book about Ignatian spirituality? Because basketball is a city game, and cities are where you find Jesuits. The early Jesuits set up shop in the cities of Europe; the countryside was for monks and hermits. The Jesuits have been in the cities ever since. Most of the twenty-eight Jesuit colleges in the United States are located in urban areas, often right downtown. Basketball is a game of constant motion; it blends teamwork, individual skills, improvisation, and finesse. If you want a metaphor for Ignatian spirituality, basketball is a good one.”

Some of the terminology is in Latin, and some of it is important to understanding Ignatian spirituality. One example is agere contra, which means “do the opposite.” It is the idea that, when tempted, we desire the opposite, When tempted by riches, seek poverty. Engaging in self-pity? Go find someone to help. Another is cura personalis or “care of the entire person.” Unlike other traditions that sought spiritual progress through asceticism, Ignatius insisted that Jesuits live balanced lives and practice good self-care.

Along the way we learn that the Jesuits were suppressed for a time, for fear of their power both by secular rulers and in the church. And yet these were the missionaries of the church. The “Fourth Vow” is one of “special obedience to the sovereign pontiff with regard to missions.” At points, this vow aroused suspicion, and yet they’ve played a vital role in both the mission and reform of the church.

I found this the ideal guide for a “newbie” to Ignatian spirituality. Manney doesn’t assume anything, he keeps the text accessible and light-hearted (he even includes an entry on “Jesuit jokes”). Yet it is clear that as an editor for Loyola Press, a frequent speaker, and lay volunteer, we are learning from someone whose life has been shaped by the spirituality of which he writes. His book is no substitute for working with an Ignatian director. Rather, I suspect it will leave many wanting to.

Disclosure of Material Connection: I received a complimentary review copy of this book from the publisher via Netgalley in exchange for an honest review. The opinions I have expressed are my own.

One thought on “Review: Ignatian Spirituality A to Z”