I’ve always been fascinated by the name. Smoky Hollow. Sounds a bit mysterious. Atmospheric. The last was literally so at one time. There often was a veil of smoke over the area in early years due to the nearby Mahoning Valley Iron Company.

The area was once the property of the James Wick family. As mills grew up along Crab Creek in the late 1800’s, immigrants densely settled the nearby neighborhoods with homes where you could read the neighbor’s newspaper through the side window, or even closer in row houses. While immigrants moved there from a number of countries, the Italian community dominated by the 1920’s. There were stores with names on them like Nazurini, Lariccia, Tucci, Gaglione, DeBartolo, Cianello, Conti, and Diciacomo. An early business that has survived to this day is Cassese’s MVR Club. Edward J. DeBartolo, Sr., shopping mall developer was born here in 1919. Jack Warner and Dom Roselli also grew up here.

The neighborhood is bordered by Wick Avenue on the west, the US 422 freeway on the north and east, and Rayen Avenue and Oak Street on the South. In our childhoods, both my wife and I attended churches on the edge of Smoky Hollow. We went to Tabernacle United Presbyterian Church, at the corner of Wood and Walnut until the congregation relocated to Austintown in 1968. My wife’s family went to Sts. Cyril and Methodius Church, just down Wood Street, and my wife went to the school next to the church through eighth grade. Many of her classmates lived in Smoky Hollow. For a time, my father worked nearby at the Raymond Concrete Pile plant along Andrews Avenue.

From the 1970’s on, the neighborhood declined, especially after the mill closures and a number of homes were vacant and razed. The vacancies combined with the growth of Youngstown State has resulted in the beginnings of redevelopment in the area. University classroom buildings, a parking garage, and apartments were built east of Wick Avenue.

Wick Neighbors, Inc in cooperation with St. John’s Episcopal Church, Youngstown State and the City of Youngstown developed a plan for the redevelopment of the area. One of the first parts of the plan to be completed was the creation of Harrison Common Park in 2011, across the street from the MVR, using a combination of $4 million in public funds and private donations. The park features a brick-paved plaza, a pergola donated by the Rotary Club, landscaping, and a large playing field. There is also a pizza/bread oven, reminiscent of the backyard ovens many early Youngstown residents used for baking bread and pizza-making. There is an inlaid, granite plat map of the Smoky Hollow area from 1920 to 1940. 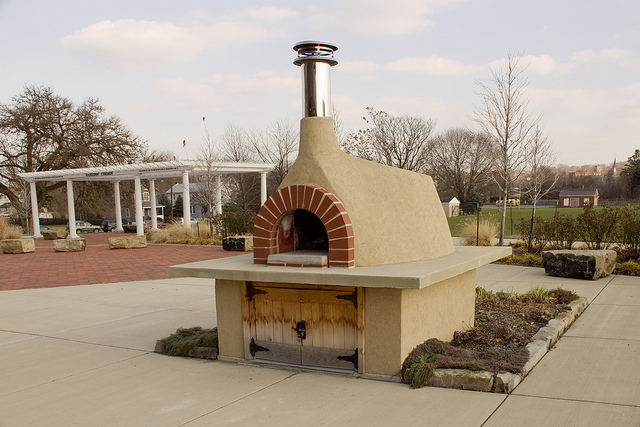 Other improvements in the area include road and infrastructure improvements on Walnut Street and the major improvements made on Wick Avenue. Long term development includes plans for housing and attracting businesses to the Smoky Hollow area. In 2014 Wick Neighbors, Inc. merged into Youngstown CityScape, which continues under the latter name.

To visit the area is to be reminded of a once vibrant neighborhood of small groceries and other businesses, densely packed housing and a vibrant neighborhood life. Now most of the houses are gone. The MVR lives on. Much of Smoky Hollow’s life is connected to the university. Harrison Common Park suggests the center of what could be a new vibrant community in the future. When that future will come and what that will look like remains to be seen. Until then the name reminds us of the place that once was. Smoky Hollow.

[Like some other names in Youngstown, some add an “e” to the name, making it Smokey Hollow. I chose the usage I found in The Vindicator, Wikipedia, and Youngstown CityScape.]

11 thoughts on “Growing Up in Working Class Youngstown — Smoky Hollow”