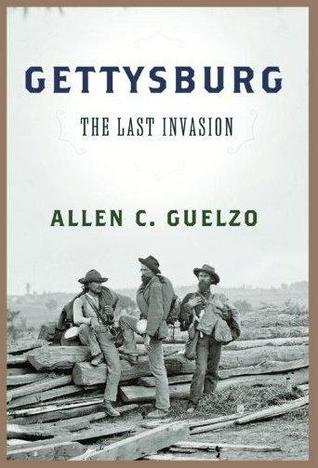 Summary: An account of the three day battle at Gettysburg, the personalities, key turning points, battlefield topography, and movement by movement narratives that both zoom out and come up close in describing the unfolding of the battle.

There are scores of accounts of the confrontation between Union and Confederate forces for a three day battle at Gettysburg, Pennsylvania, July 1-3, 1863. Allen C. Guelzo’s account, written on the 150th anniversary of the battle has to rank among the best. Guelzo directs the Civil War Era Studies program at Gettysburg College, which means he resides on the site of the battle. I know of no book that reflects such an intimate acquaintance with the topography of Gettysburg, whether it be the two hills that make up Culp’s Hill, Sherfy’s Peach Orchard, or Little Round Top, or even the locations of fences, that made advances more difficult. At Gettysburg, topography was a critical factor on all three days, and Guelzo helps us see how strategic choices, topography, and leadership in battle all contributed to the outcome.

The book is organized into four parts, one for the decisions and movements leading up to the battle, and one for each day. It’s clear that neither Lee nor Meade had “planned” to fight at Gettysburg. Meade had only taken command three days earlier and wanted to gather his army behind Pipe Creek, positioning him between Lee and Washington, a strong position to receive an attack. Lee wanted to scare the North into negotiating, as well as secure much needed supplies for his army. If he could defeat a spread out army in detail, he would take that chance, but without scouting from Stuart’s cavalry, absent on a ride around the Union forces, he was guessing.

When lead elements of his forces engaged Union troops under Reynolds and Howard, he thought he had his chance. The Union leaders barely were right that they could get the rest of the army there ahead of the Confederates. On such calculations the battle swayed back and forth all three days. Guelzo traces these through the battle’s three days: Howard’s decision to leave troops on Cemetery Hill and Ewell’s decision not to attack this thinly held position the first night, Longstreet’s delayed movements on the second day and Dan Sickle’s near fatal advance of his troops to the Peach Orchard, the last minute decisions of Warren and Joshua Chamberlain’s stand that held Little Round Top and the near rolling up of the Union position by Barksdale’s Mississippians, and the fierce resistance of Alexander Hays troops redeeming their ignominious defeat at Harpers Ferry.

Particularly as I read the second day’s account, I found myself on the edge of my seat wondering how the Union managed to hold on. It seemed to me that if Longstreet had attacked a little sooner, and had a bit more support, that the Army of the Potomac could have been shattered. In all this, Meade comes off rather poorly, letting Sickles take a weak position that opened a gap in the rest of his lines, promoting fellow McClellanite John Newton over Abner Doubleday for command of the 1st Division, and preparing for retreat while Winfield Scott Hancock moved troops into gaps, holding Cemetery Ridge and Hill. After they had held the position, according to Guelzo, Meade wanted to retreat and was overruled by his generals.

Then there is the third day and the perennial question of “why Pickett’s charge?” Guelzo reminds us of the military precedents for the success of such charges that may have been in Lee’s mind. Again we grasp what a near run thing this was as Armistead reaches the high water mark of momentarily seeing no one in front of him, only to fall. Had the artillery barrage been more effective, had Pickett more support, much more support, I would venture, the outcome might have been different.

Beyond understanding the outcome of the battle, Guelzo takes us inside the battle. We hear what soldiers are talking about as they wait to give or receive attacks, we witness the incongruity of fierce fighting and human compassion between opposing soldiers, and the gore of war, as brains spatter, limbs are torn off, and men are eviscerated. We read of the primitive surgeries, piles of limbs stacked up, and no infection measures.

Guelzo also helps us understand the politics in the Army of the Potomac that undermined Lincoln’s efforts to defeat Lee. As already noted Meade was a sympathizer with McClellan who wanted a negotiated settlement that likely would have preserved the Confederacy, and he promoted accordingly. Meade was satisfied to drive Lee back across the Potomac when he had an opportunity to defeat him, prolonging the war and the loss of lives (unlike abolitionist John Reynolds, who was spoiling for a fight, and whose aggressive actions precipitated the battle where he would lose his life).

This is a great book to read in conjunction with a battlefield visit. There is something for both Civil War aficionados and those reading their first account of the battle. Most of all, he helps us understand why this battle was “the last invasion” and just what a near run thing it was.

One thought on “Review: Gettysburg: The Last Invasion”