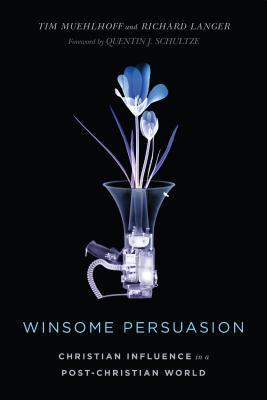 Summary: Explores how Christians might effectively engage a dominant public culture by understanding the nature of counterpublics and the elements that go into effective communication and engagement.

It has become almost tedious to talk about how fraught our public discourse is with toxic argument and discord. Furthermore, there are many who would consider Christians a part of, perhaps a substantial part of, the problem. Alternatively, there are times they are utterly invisible, content to tend their own flocks. In Winsome Persuasion Muelhoff and Langer contend that far too often, the only modes by which Christians have sought to engage are the prophetic or the pastoral. While there are times and places where these are necessary and may be effective, they may not be what is needed in our present time. In this work, the authors explore a different mode, that of persuasion, that both recognizes difference, and seeks to overcome this by winning people rather than arguments or political power.

The authors begin by emphasizing the importance of understanding what it means to be a “counterpublic.” A dominant public not only holds the prevailing ideas, but has the power to prevail in enacting them. Thus counterpublics are “groups that exclusively engage in opinion formation and lack the ability to make policy decisions.” The authors identify three characteristics of such groups: opposition, withdrawal, and engagement. I found the discussion of withdrawal particularly illumining in highlighting the development of hidden transcripts that often may be rhetorically harsh and unflattering (consider Hillary Clinton’s “basket of deplorables” or Mitt Romney’s “47 percent” who don’t pay taxes and are dependent upon the government).

The authors then apply this understanding of counterpublics to Christian counterpublics. They observe how counterpublics often function in an argument culture: consideration equals condoning, monologue is valued over dialogue, disagreement degenerates to demonizing, all of which online disinhibition intensifies. They call instead for Christian counterpublics to lead with compassion that cares for others, goes beyond sympathy to empathy, confronts the uncompassionate, and is unconditional. This leads to establishing credibility as a counterpublic by demonstrating knowledge both of facts supporting one’s view and the reasons others would oppose it, practicing the virtues including humility and building goodwill by acknowledge the worth of those with whom we differ. There is a lengthy discussion of the critical value of the ethos of the messenger.

Part Two of the book focuses on how we engage others. It begins with crafting your message. One of the most valuable ideas here was finding an “audience of one,” a person with whom you have some relation who represents the public you wish to engage, which often exposes your blind spots, your “in group” language, and your need to find ways to frame your argument in universal terms. The authors cover finding starting points of agreement, using images, and connecting with the plausibility structures of the public to be engaged.

Messages need to be delivered as well as crafted. A crucial factor is persona, ideally one of humility that is able to laugh at oneself, and can give a fitting and succinct response in public discussion, whether with stories or statistics or a combination of both. Appropriate identification, without misappropriating identities helps in gaining a hearing. “Loose connections” help in conveying a message where we make common cause around limited but shared commitments. The authors helpfully talk about the strengths and pitfalls of such loose connections.

The last part of the book is their attempt to illustrate “winsome persuasion” by each articulating responses to the Supreme Court’s decision to uphold same-sex marriage. The two responses are very different, albeit with some common characteristics that reflect principles of winsome engagement. Then the authors engage in a dialogue highlighting both appreciation and differences with each other. Some might find this last section unsatisfying in looking for more far-reaching answers. Yet for me, the responses and discussion reflected thoughtful yet succinct statements such as one might share in a public forum, and a good example of civil dialogue characterized by both goodwill, and real engagement.

The book is enriched by four historical sketches illustrating principles developed in the work: Saint Patrick, Jean Vanier, Harriet Beecher Stowe, and William Wilberforce. As a Wilberforce fan, I loved the four lessons they drew from his “great speech” advocating abolition of the slave trade:

I found myself thinking how important this work is in our setting for the counterpublic that might be described as the “evangelical resistance” to the current president and to the evangelicals and others who support the president. In particular, Muelhoff and Langer’s book is a challenge to move from opposition and withdrawal (complete with hidden transcripts that invariably leak) to substantive engagement.

Winsome Persuasion represents an important extension of the work of Tim Muelhoff and his collaborators into the public arena. His earlier work, I Beg to Differ (review) focused on difficult interpersonal communication. In this work, Muelhoff and Langer move from the personal to the public. They call us to move from hubris to humility,  from combat to compassion, from demonizing to dialogue, and from argument to at least limited forms of agreement. Most of all, they remind us both of the urgency, and the possibility of a better public conversation.