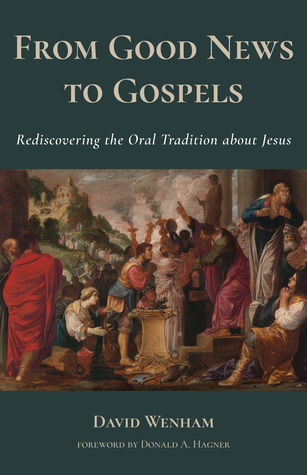 Summary: Explores the role of oral tradition as a source for the written gospels.

Depending on the gospel and the scholar, anywhere between roughly 30 and 60 years elapsed between the death, resurrection and ascension of Jesus and the accounts of the mission and message of Jesus we know as the Gospels of Matthew, Mark, Luke, and John. Most scholars propose that Mark was the earliest of the gospels and that Mark’s material served as one of the sources for Matthew and Luke. At the same time these gospels share material not in Mark, often posited to originate in “Q” (short for Quelle, German for “source.”). There is also material unique to Matthew (“M”), and Luke (“L”). Most have considered these “literary sources,” that is written and circulated, but all we have are the canonical gospels. Q, M, and L exist only hypothetically.

David Wenham argues that serious consideration needs to be given to oral sources. The cultures in which the gospels arose were oral cultures and the possibility of accurate transmission is far greater than often credited. He contends that significant portions of Jesus life, teaching, as well as passion were proclaimed as early believers pursued the mission of Jesus. Wenham notes the emphasis on teaching, learning, remembering, and witness in Acts, as well as the four gospels, all having to do with the faithful transmission of the accounts of Jesus.

Wenham then turns to the writings of Paul, the earliest written documents. 1 Corinthians 15: 1-3 provides the clearest evidence of Paul’s reliance on what were probably oral traditions in speaking of the death, burial, and resurrection of Jesus. 1 Corinthians 11:23-26 is another example, as he speaks of what he received regarding the Lord’s supper. He goes on to note a number of passages including the “thief in the night” of 1 Thessalonians 5:2 and other teaching about the Lord’s return, teaching on non-retaliation in Romans 12:14-19 that echoes the Sermon on the Mount, “love fulfilling the law” in Romans 13:8-10 echoing the great commandment, and a number of others.

He also discusses the places where Matthew and Luke record material that is in Mark but seem to be drawing on another source that overlaps Mark. Traditionally, this is the hypothetical “Q” but Wenham argues that oral tradition is an equally plausible explanation. He also focuses on two incidents of oral tradition in the gospels and also in Paul’s writing, the references to the labor being worth his hire, and the discussions of “the thief in the night” and the surrounding material. Wenham argues that these are strong examples pointing to oral traditions around the mission and return of Jesus. He then considers how extensive this oral tradition is and notes that Paul’s writings show evidence of the whole story of Jesus–his ancestry, birth, ministry, last night, death, resurrection, and commission to evangelize the nations.

Wenham then concludes with some fascinating proposals, that the hypothetical Q might be oral tradition rather than a lost written document, and that Matthew and Luke may have drawn not only upon Mark, but perhaps upon oral material that pre-dated Mark. Rather than drawing on a couple of hypothetical literary sources, these writers may well have drawn upon widely circulated oral traditions, instead of or in addition to these.

Aside from offering a possible explanation as to why we have not found any manuscript evidence of hypothetical Q, L, or M, the primary contribution this makes is to help us see an alternate route to how oral traditions preached and taught became the written gospels (though there is little here about John), and how oral traditions may offer a good explanation for the connections between the gospels and Paul’s letters. I suspect if Wenham’s proposal gains traction, many will continue to find Q, L, and M helpful for delineating the departures of Matthew and Luke from Mark but that, increasingly, these may be posited as oral traditions rather than literary sources. There is a parsimony and explanatory power to Wenham’s proposal in this slim volume that is worth far more study.

9 thoughts on “Review: From Good News to Gospels”