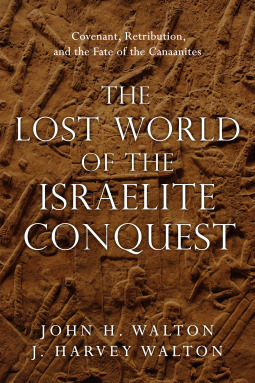 Summary: Explores the biblical accounts of the Israelite conquest of Canaan, looking closely at the ancient Near East context and arguing that this was not a divinely commanded genocide or Holy War.

One of the more troubling parts of the Bible are the narratives of Israel’s conquest of Canaan, and the apparent genocide of the Canaanite people at God’s command. Often this is justified as a judgement on the wickedness of the Canaanites. It is even more disturbing when these texts are appropriated to justify other “Holy Wars” or culture wars against evil in society.

In this fourth installment to the “Lost World” series, John H. Walton is joined by his son J. Harvey Walton, in a close study of the biblical texts often understood as God’s command of Holy War against Canaan as divine judgement. Similar to Walton’s approach in other books in this series, the authors combine careful work on cultural backgrounds with close reading of the pertinent biblical texts. Like other books, they present their study as a series of propositions, grouped into six parts.

First, they lay groundwork in asking the question of how we interpret the Bible, emphasizing that it is an ancient document and that often our problem is what our expectations of what the Bible is, which differs from its true nature. In this case the Bible is neither defining what goodness is for us nor telling us about how to produce goodness, but rather in the context of God’s covenant with Israel, how God is bringing about the goodness he purposes. Thus, we must never read these texts as warranting Holy War or a kind of jihad in our own context.

Third, they argue that the Canaanites are not guilty of breaking God’s law because they did not partake of the covenant and its stipulations. Their expulsion from the land is not analogous to the expulsion of Israel from the land for their unfaithfulness to the covenant.

Fourth, the Waltons look at the language and imagery of the conquest and contend that the descriptions of the Canaanites follow ancient Near East conventions for describing an enemy as “invincible barbarians” Likewise, the behaviors described as “detestable” are from the framework of God’s ideals for Israel under the covenant and not indictments against the Canaanites for crimes against a covenant they are not under. And finally, the language of conquest recapitulates that of creation, in which disorder (chaos) is replaced with order (cosmos). Disorder must be cleared, not as punishment against the Canaanites, but to establish God’s covenant order through Israel.

The fifth part is perhaps most significant in its discussion of herem, most often translated as “utterly destroy.” They argue rather that it involves the idea of removing something from use, so that a new order or use can be established. Killing people is not inherent in herem, but rather the destroying of the identity of a community, particularly the identity markers associated with idolatrous worship. Killing may happen in the course of this, as it tragically does in all ancient wars, but this is not the focus of herem.

Finally, the authors contend that this offers a template for understanding the New Testament, not in attacking those outside the community of faith, but making herem all identities in conflict with absolute allegiance to the Lordship of Jesus. What is to be attacked and removed from use is not outsiders, but our own false allegiances, false identities or any identity that competes for paramount status with our identity in Christ.

This, along with the argument that God does not command ethnic genocide in these passages is important. Yet this argument left me troubled. The plain reality is that even if this wasn’t genocide, people died to set up this new order of God. If they died, not because they were guilty of sins or crimes against God (because they were outside the covenant and its stipulations), but simply as part of a process of destroying the identity of a community, this seems a distinction without a difference. The idea of retributive action at least seems to carry the sense of a just judgment, even if it does involve bloodshed. “Removing an identity from use” driving them from the land, seems more humane, except that the same number of people die, only as “collateral damage” of the conquest. There is something about this that seems more heartless. It also seems to dance around the plain sense of texts that herem in the context of the conquest does involve the destruction of lives in city after city. I did not feel the authors dealt adequately with this problem.

What I’m left with is that these are difficult texts, similar to Genesis 22 in which God commands the sacrifice of Isaac. The last minute substitution of the ram does not make this less challenging. Likewise demonstrating that these texts offer no warrant for genocide is only marginally comforting. Perhaps our difficulty is that we expect God to be nice, a “tame lion” as it were. We would rather a God who remains above the fray than one who gets involved in wars of conquest to effect his purposes. We don’t like the idea of trying to justify the ways of God when they seem unseemly. We likewise are uncomfortable with a God who takes on flesh and blood and dies for us. Many Christian heresies are efforts to sanitize this event. I don’t want to say that is what the authors are doing here. They obviously care deeply about scripture. But I also don’t think we can soften the shocking effect of these passages, or should. These passages remind us both of the tragedy of the human condition, and that God accommodated that human condition in not remaining aloof from war and death even as God worked out redemptive purposes for humankind, first through Israel, then for all of us.

2 thoughts on “Review: The Lost World of the Israelite Conquest”