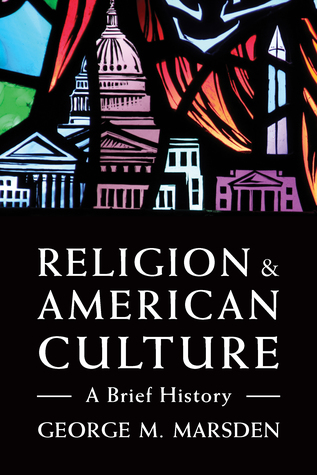 Summary: A survey of the interaction of religion and American civil culture from the nation’s beginnings up to 2016.

“The United States is both remarkably religious and remarkably profane.”

The opening line of this survey of the history of the interaction of religion and American culture is an accurate thesis summary of this work. In part, it reflects the point of view of the author, George M. Marsden. He notes in the introduction to the work that his thinking is shaped by an Augustinian outlook that recognizes both the dignity of humans in God’s image and the reality of human evil, the parallel cultures of “City of God” and the “City of Man,” and that Christians inhabit both cities.

Marsden traces this interaction from the Protestant heritage of the early immigrants, which held sway in the country until the Civil War and the conflicted engagement with Native Peoples–from uneasy coexistence, to violent displacement, to occasional mission efforts–a conflicted record. He examines the different streams of thought contributing to the American revolution–and how they converged and diverged. He examines the heritage of dissent, the secular and deist founders, and the ideas shared in common by Locke and the Puritans. He notes a paradox of high ideals of liberty and justice, and the beginnings of manifest destiny and the use of power to displace native peoples, and hold Africans in servitude. These threads continue into the nineteenth century with the revivalist spread of evangelical culture, marked by increasing levels of education as frontier denominations establish colleges. This culminates in institutions like Oberlin College, motivated by religious revival, enrolling female students, and advocating abolition in an increasingly divided evangelical church along the geographic lines of north and south.

The post-Civil war era on its face seemed to reflect a continued advance of Protestantism, including Protestant missions. At the same time developments of both social progressivism, and the advent of Darwinism and higher critical theories brought the first cracks in the established position of both mainline and evangelical Protestants. They also faced an increasingly plural situation with the immigration of large numbers of Catholics and Jews, as well as the growing influence of the African-American church, which in turn, made its contribution to the rise of pentecostalism.

The fault lines become more pronounced in the early twentieth century with divides in mainline denominations between north and south, a rise of fundamentalism in reaction to liberal scholarship. John Dewey’s secular ideals prevail in the educational establishment. The Niebuhr brothers and Karl Barth offer a neo-orthodox alternative to liberal scholarship in more mainline contexts while those of evangelical belief retreat into fundamentalism.

Marsden notes another great reversal post-World War 2 with the rise in church membership, the baby boom, the ministry of Billy Graham, a re-framed culturally engaged evangelicalism, as well as the growth of Jewish and Catholic influence in the country. The African-American church led by Dr. King awakens and asserts its call for justice and civil rights. Then a rising evangelical movement becomes increasingly politically engaged and Marsden traces this history from the rise of Jimmy Carter to the election of 2016, chronicling an increasingly fragmented, secularized, and polarized country.

This “brief history,” as the subtitle calls it, covers extensive ground, and various movements, sects, and various religious communities, in a history at once descriptive, and illustrative of the “religious and profane” theme. Marsden particularly portrays the conflict between religious ideals and our treatment of native peoples and African-Americans, the changing face of Protestant privilege, the unholy alliances that have existed between Christians and our government throughout our history, the growing pluralism, both religious and irreligious, and the perennial tension between the country’s religious and secular ideals.

Marsden concludes with a few thoughts on preserving a truly pluralistic society, which he believes begins with clarifying the rules that protect free speech and genuine diversity within various sub-communities, protecting them from the tyranny of the majority. He concludes by noting why knowledge of our history is so vital to this project:

“This book is a history, and it is much easier to describe how the United States got to the point it has reached with respect to its secular and religious diversity than it is to prescribe exactly how its future with respect to those diversities might be improved. Still, we can safely say that there will be no improvement without historical understanding of how we got to be where we are. One lesson is sure. When it comes to religion, it will not do to resort to easy generalizations; evaluation of its roles must always be nuanced. Such nuance will help us see that religion, even at what we may regard its best, appears in human affairs almost always as a mixed blessing.”

Marsden has given us the resources for that nuanced “understanding of how we have gotten to be where we are.” This seems critical for religious and political leaders alike, to enable wise and humble decisions that avoid the hubris and folly that sadly has too often characterized our history.

One thought on “Review: Religion and American Culture”