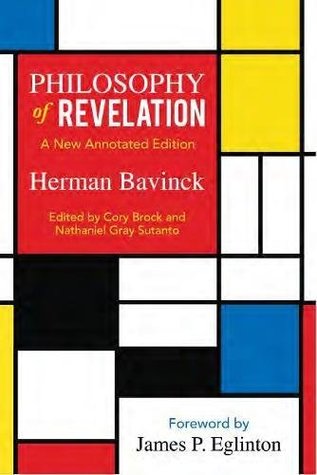 Herman Bavinck (1854-1921) was a Dutch Reformed theologian, writing mostly in Dutch, from the late nineteenth, early twentieth century. With the translation of his Reformed Dogmatics in 2003, studies of Bavinck’s work has flourished. This work represents an expanded version of Bavinck’s Stone Lectures at Princeton, first translated in 1908 by Geerhardus Vos. Two contemporary Bavinck scholars recognized the importance of this work to discussions of Reformed epistemology, and have given us this new annotated edition of the work. The annotations to the work are found in the footnotes and address everything from alternate translations of the text to explanations and context for Bavinck’s arguments, a tremendous asset to any modern scholar-theologian studying Bavinck. This is particularly important because Bavinck is engaging philosophers, scientists, and historians of his day, who are often not a part of contemporary academic and theological discourse.

Bavinck’s basic argument, anticipating the work of Alvin Plantinga, is that revelation is a warranted basic belief. The lectures argue this inductively from the disciplines of philosophy, natural science, history, religion and religious experience, culture, the Christian faith, and our teleology, our understanding of the future. Revelation in its general form (the things we can’t not know), and particularly around religious experience and Christian faith, special revelation, are shown to be basic to human experience and actually foundational to science, history, and philosophy.

Bavinck writes in a period where modernism had theology on its heels. Scientific research exalted the materialistic, rational explanation of all. What I was most intrigued with in the work was how Bavinck anticipated much of the developments of the last one hundred years in the movement from materialism to various forms of pantheistic monism in shaping our view of reality. Bavinck is one of the first I have observed to address the questions of the one and the many and how revelation, and the Christian faith offers the only satisfying explanation about connections between material and spiritual reality, and the sources both of oneness and true diversity. He is also prescient, in his discussion of revelation and the future, in anticipating the eugenics movement, and more recent efforts in genetic modification or even trans-humanism, human efforts to control our future.

The strength of this work is the basic argument Bavinck is making, and its connection to later thinkers from Van Til to Plantinga and Wolterstorff. An important aspect of this philosophy of revelation is the argument for how revelation serves as the basis of the coherence of all intellectual inquiry. This is desperately needed good news for our modern, fragment university world, as well as our fragmented modern lives, and even sense of self.

Sometimes, Bavinck’s engagement with scholars of his day makes it harder for those of us unfamiliar with them to keep track of his argument. The annotations are quite helpful in this regard. While it may have felt like meddling in the text, some form of subheadings or marginal summaries would have been helpful to this reader in keeping track of the thread of his argument. In some cases, such as critiquing Darwin, it felt that he might have been relying on apologetic arguments of his day that are less helpful with the advances of biological science. I realize that such a criticism simply reflects the problem of engaging any scholarly work from one hundred years ago.

“Revelation in nature and revelation in Scripture form, in alliance (verband) with each other, a harmonious unity which satisfies the requirements of the intellect and the needs of the heart alike.” (p. 242)

[By the way, don’t overlook the editors explanation, in their introductory essay (pp. xxxii-xxxiii), of the use of Piet Mondrian’s work on the cover of this work!]

5 thoughts on “Review: Philosophy of Revelation”