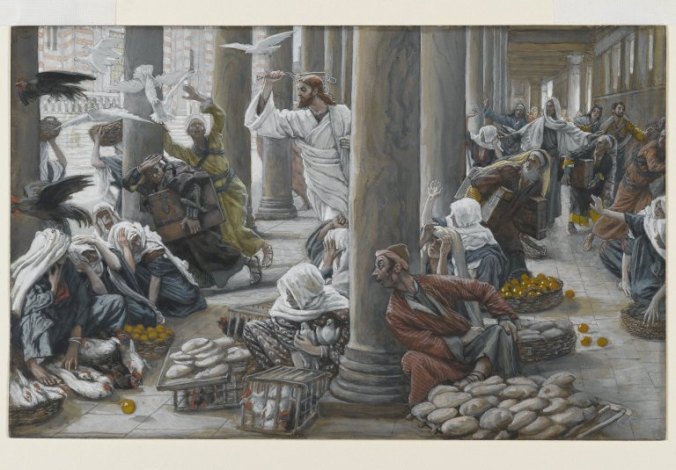 James Tissot, The Merchants Chased from the Temple. Public Domain via Wikimedia

Jesus entered the temple courts and drove out all who were buying and selling there. He overturned the tables of the money changers and the benches of those selling doves. (Matthew 21:12, NIV)

This verse was in the Palm Sunday reading at my church this past Sunday. I should mention that my reflections here may bear scant resemblance to my pastor’s sermon, so this only reflects the workings of my mind, not what my pastor had to say (which I also remember!).

I was thinking about some of the recent “What would Jesus…?” slogans. There was “What Would Jesus Do?” complete with bracelets. Later on, some environmentally oriented Christians started a campaign with the slogan “what would Jesus drive?”. This verse inspired me with a new one: “who would Jesus drive out?”

The context is that Jesus is standing in the temple courts. More precisely, he is standing in the court of the Gentiles–the closest that Gentiles  who are “God-fearers” and want to worship Yahweh are permitted to come. The sellers provided a service for Jews who wanted to offer sacrifices, providing a money exchange (probably at a tidy profit) into the approved temple currency. Then they sold birds and other approved sacrificial animals for those who didn’t want to transport them long distances. There was probably a calculation that this was a convenient location. The Gentiles, if there were any who were interested, were considered unclean. They should be glad they are even allowed here, amid the bargaining and calls and cries of the birds and animals–and all the smells of a barnyard. Not exactly welcoming for a Gentile wanting to worship Yahweh. I suspect a more than a few turned away.

Who did Jesus drive out (WWJDO)? It was those whose presence and actions turned spiritually hungry outsiders away from God. It was those who, by their actions, made God their exclusive preserve. We might be troubled by what seems an act of anger, but the focus here is an act that sets things to right, and communicates God’s displeasure with their exclusionary actions.

Strictly speaking, there is no longer a physical temple or a “court of the Gentiles.” The only temple now is the people of God (1 Peter 2:5). So who would Jesus drive out, today?

It would seem to me that it is any whose actions turn people away from Christ and the people of God. It might be intentional or unintentional. I suspect in suggesting this, you may already be composing a mental list of those Jesus would drive away. I have to admit that this is where my mind went when I heard these ways.

Of course, everyone on my list was someone else. I was notably absent from the list. And I started to wonder about that:

Would I be among those Jesus would drive out? It seems that Lent, and particularly Passion Week is a time for self-examination rather than finger-pointing. It is a time to ask, are there things that I am blind to that are driving people away from God, and could drive me away as well? From what must I repent? Where have I been justifying myself?

What is clear is that Jesus wanted to include far more than those he drove out (who by no means were permanently excluded). The verse Jesus quotes is Isaiah 56:7, which says, “For My house will be called a house of prayer for all the peoples.” Jesus is the one who welcomes those who say, “God, have mercy on me, a sinner” (Luke 18:13). He is the one who promises rest to the weary and burdened, and I will give you rest” (Matthew 11:28).

Who would Jesus drive out?