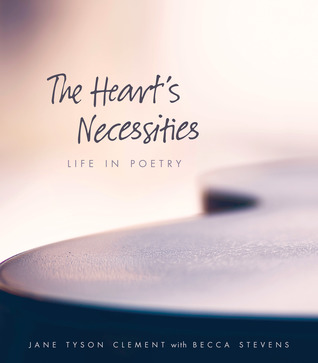 Summary. A collection of the poetry of Jane Tyson Clement, a member of the Bruderhof Community, interleaved with biography and comments by musician Becca Stevens, who has set several of Clement’s works to music.

Jane Tyson Clement grew up in the shadow of Columbia, began writing poetry in high school and went to Smith College. Like many, she lost and then recovered her faith. She married in the shadow of World War II, to Robert, a lawyer. Both pacifists, they eventually found their way to the Bruderhof communities where they lived the rest of their lives. Some of Jane’s poetry was published during her lifetime. More of it was found after her death from Alzheimer’s disease in 2000.

This newly published work offers a sampling of her poetry throughout her life combined with biography, and the comments of Becca Stevens. Becca is a musician who found in Clement’s Winter and February Thaw the words she was searching for to express grief for Kenya Tillery, a musical collaborator lost to breast cancer. Both of these works appear in this volume and one can listen to the song, Tillery, and four other settings of Clement’s poems at Songs for The Heart’s Necessities.

One of the marks of Clement’s poem is the keen observation of nature–the sea, birds, trees, the seasons–and the whispers of the transcendent that we overhear in her poems, speaking to or echoing the heart’s longings. The lines from which the book finds its title, in the poem Winter, are a good example:

The heart’s necessities
include the interlude
of frost restricted peace
on which the sun can brood.

Manasquan Inlet II is one of her last poems, and she is still connecting the ebb and flow of the tides and the “powers beyond our ken”:

No one can stem the tide; now watch it run
to meet the river pouring to the sea!
And in the meeting tumult what a play
of waves and twinkling water in the sun!

Ordained by powers beyond our ken
beyond all wisdom, all our trickery,
immutable it comes, it sweeps, it ebbs
and clears the filthiness and froth of men.

Some of the most moving poems in this collection are the “To R.A.C.” poems, written to Robert, her future husband. She traces the growth of their love from her first recognition of him, and she believes, he of her, to be followed by him walking out the door. We listen as they share their love of the world’s beauty while their own love is growing. We hear her struggling with whether her love is some constructed thing, as she writes, “I will remember you not as you are/but as I willed you were.”

Her later poems testify to her deepening faith, and are often piercing in insight. Lord, Show Me Thyself speaks to our longings for God, and yet how unprepared we are when God actually shows up and we are faced with the choice of whether we will “stand and open wide/the doors of being to thy light.” She describes many of us, the respectable sinners, in Resolve as she declares, “My sins are inward and refined, my friends the gentle friends of God; I must go seek the publicans, the wild companions of my Lord.”

Becca Stevens strikes me as one of many who are the “spiritual but not religious,” one of those sometimes called a “none.” Yet the poetry of Jane speaks deeply to her, and perhaps illustrates how more may be drawn to authentic beauty than persuasive attempts. She observes that “Jane has a rare ability to talk about God, spirituality, and faith in a way anyone can relate to–not in an alienating way….She looks to the movements of birds, the sea, and the seasons to answer her unresolved struggles with faith.”

For that reason, Stevens involvement in this book seems to work. She doesn’t impose interpretations upon us so much as let us hear her own musings on Clement’s work. Her contributions allow us catch our breath after drinking deeply as we read the poetry. Interspersed biography helps us understand the settings of poems from different periods. The photography combines some of the places Jane Tyson Clement would have frequented and the creative process of Becca Stevens. All in all, it is exquisitely done. This book makes a wonderful gift to a friend, or to oneself, inviting us all to ponder “the heart’s necessities.”

One thought on “Review: The Heart’s Necessities”