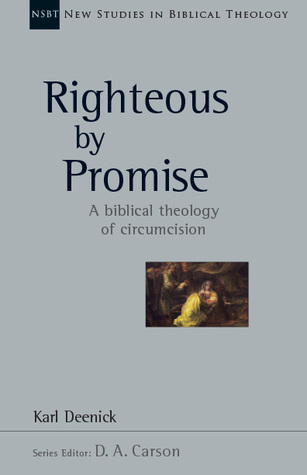 Summary: A biblical theology of circumcision, beginning with Abraham’s being reckoned righteous on the basis of faith in God’s promised seed, who would bless the nations, through its significance in the law of Moses, and fulfillment in the work of Christ.

Male circumcision. The cutting and removal of the foreskin. It is a defining sign of God’s promise to Abraham and his descendents. To this day, bris or circumcision is a public celebration in Jewish communities, recognizing the inclusion of a male child into the covenant that began with Abraham, witnessed by family and friends, surrounded by ceremony and prayer, and celebrated with food.

It became a point of controversy as early Christianity spread beyond its Jewish roots, with some arguing for its practice to include non-circumcised Gentile men in the community of believers. Others, notably the Apostle Paul argued against this, that identifying with Christ by faith and in baptism was sufficient for inclusion in the church. The word, both in its literal meaning and applied metaphorically to the heart or even the ears comes up throughout scripture. Yet Karl Deenick, in making the case for this work, contends that beyond brief surveys, there has been no comprehensive study of scripture, formulating a biblical theology of circumcision.

This work remedies that, in Deenick’s study of texts in Genesis, Leviticus, Deuteronomy, Joshua and the rest of the Old Testament, and in his careful exegesis of key New Testament texts where the word is used in Philippians, Colossians, Ephesians, Romans 2-4, and Galatians. He begins with Genesis 15 and 17, and the statements of Abraham believing and being reckoned righteous, and Abraham receiving the covenant sign of circumcision with the exhortation to walk faithfully and blamelessly and to keep covenant.

These words arise in various forms throughout the Old Testament material. Deenick traces these passages, and contends that blamelessness did not consist in sinless adherence to the law, but rather in faith in Abraham’s “seed” and the sacrifices that removed sin’s guilt, anticipating the fulfillment of the promise, thus being “righteous by promise.” He notes the passages that speak of uncircumcised hearts among those circumcised of body, referring to self-justifying efforts that fail to acknowledge one’s sin and humbly look to God’s promise.

His discussion in the New Testament centers on Paul’s letters with brief discussion of Acts 7, and an especially lengthy discussion of Romans 2-4. While there is different language and emphases, Deenick shows that Christ is the fulfillment of the promise of which circumcision was a sign, a visible reminder that the hope of the world was the “seed” of Abraham. Because the sign is fulfilled in Christ, and because the promise of righteousness through faith in Christ, circumcision was no longer necessary for inclusion in God’s people. True circumcision is the circumcision of the heart, that removes the hardness of heart that fails to humbly depend upon God and walk in God’s ways. This comes not by human effort but by the gift of the Spirit, working God’s resurrection life and righteousness in us.

Deenick carefully unravels textual details that often puzzle readers or are glossed over. He helps us understand both the significance of this somewhat puzzling sign, and why its practice was not required in the Christian movement. He models careful intertextual reading that both honors the distinctive context and contribution of particular texts while elaborating the consistent testimony to “righteousness by promise” throughout the canon.

2 thoughts on “Review: Righteous by Promise”