One of my childhood memories was driving down to Lowellville to the Pittsburgh and Lake Erie switching yards watching trains loaded with coal, or products from the nearby mills being switch for transport to various places. As you drove down, the valley became steeper and you realized that you were witnessing the transition to the Appalachian foothills that became more pronounced in western Pennsylvania.

In the early 1800’s John McGill, a Revolutionary War veteran, and his brother Robert, established both a grist mill and a sawmill on the south side of the Mahoning River and a settlement that was known as McGillville in its early days. Across the river was another settlement, Lowell, probably after the proprietors of the Lowell Milling Company, a flour mill.

Things were pretty sleepy here until the 1830’s with the development of the Pennsylvania and Ohio Canal. In 1836, the village was platted as Lowellville and the canal went into operation in 1839-1840. Lowellville became a shipping center for flour, and for coal from nearby Mt. Nebo. Later on limestone quarrying also contributed to the industrial growth of this area. This growth also led to siting Ohio Iron & Steel’s “Mary Furnace” there in 1845. It was purchased by Sharon Steel Hoop Company, later Sharon Steel. The mill operated until 1961 and was closed in 1963.

Roslyn I. Torella has written what is probably the definitive history of Lowellville. Her Lowellville, Ohio: Murders, Mayhem & More chronicles how Lowellville became a rowdy place when both Struthers and Lawrence County in Pennsylvania (New Castle) went dry, and all those seeking alcohol descended on Lowellville, filling its bars, leading to fights and a prison lock-up for the drunks. But it brought a lot of money into Lowellville. During Prohibition, it was a site of bootleg operations.

On the other side of the coin, the boys of Lowellville stepped up during the Second World War with over 20 percent of the town’s population signing up. Clingan Jackson, longtime Vindicator political reporter lived here for part of his youth and graduated from Lowellville High School. The population in Lowellville as elsewhere in the Mahoning Valley, peaked in 1957 at 2500. The eclipse of the steel industry has turned Lowellville into a quieter place, shrinking from 1281 to 1155 residents between 2000 and 2010. The village has renovated historic buildings in the center of town as well as erecting a gazebo in the park. The village website lists a few restaurants, a number of small businesses, and houses of worship. Of course, there is the Our Lady of Mt. Carmel Festival each summer. 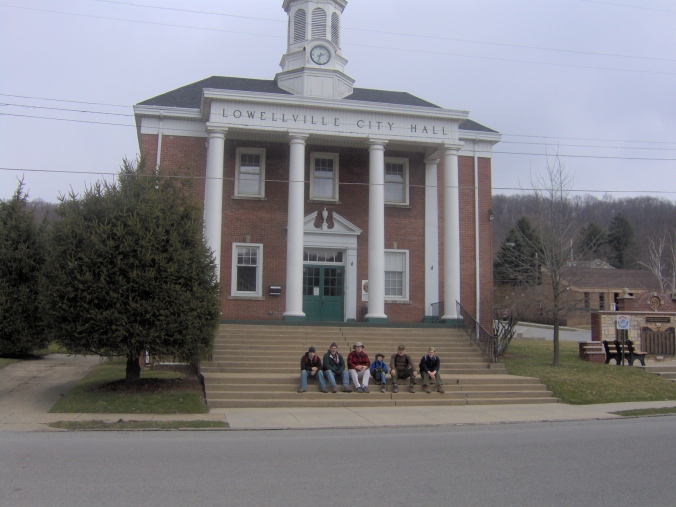 It will be interesting to see whether this little village declines are grows in the coming years. One thing is clear, it is a place with an interesting past with a strong focus on family and community and its local school, perhaps with less problems than some of the larger nearby communities. Wouldn’t it be great if Lowellville were thriving when it comes time to celebrate its 200th birthday in 2036?

4 thoughts on “Growing Up in Working Class Youngstown — Lowellville”