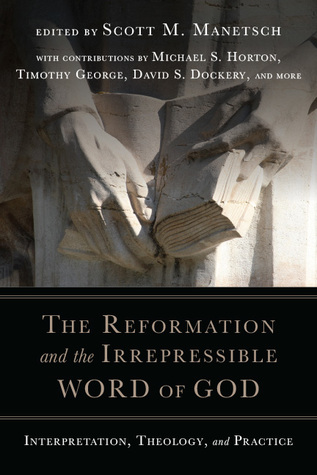 Summary: A collection of eight papers on the vital role of scripture in Reformation thought and practice.

“Irrepressible.” What a great word to use in a title. Mirriam-Webster’s definition of the word is “impossible to repress, restrain, or control.” The Reformers often pointed to Hebrews 4:12 which says, “For the word of God is alive and active. Sharper than any double-edged sword, it penetrates even to dividing soul and spirit, joints and marrow; it judges the thoughts and attitudes of the heart” (NIV).

I suspect for many, “irrepressible” is far from the first word that might come to mind as they think of scripture. Some might consider it ancient, confusing, irrelevant, or even tedious. Yet many others (I would include myself here) have experienced the power of scripture to convict, to comfort, to open one’s eyes in wonder toward God, to assure in one’s hope in life and death, and to “equip for every good work” (2 Timothy 3:17). It is not so much a matter of understanding the Bible as discovering that I am understood by the Word of God, as God speaks through the words on the page, knowing me better than I know myself, facing me with those things of which I’ve been blind, deluded, and sometimes willfully oblivious.

Beginning with Martin Luther, it has been contended that the Reformation was driven by the study of and preaching of the scriptures as the Word of God for the people of God. This drove translation of the scriptures into the vernacular in countries where the Reformation took hold, particularly in Germany and England. In more contemporary scholarship, the power of the “scripture principle” has been eclipsed by other factors — economic, sociological, and political. However, recent scholarship has seen a resurgence of the Bible as a key factor in the Reformation, and this volume, consisting of eight papers plus an introduction by Scott Manetsch and an afterword by Timothy George, is a significant contribution to that scholarship. The papers were first presented at a conference at Trinity Evangelical Divinity School in 2017 on the five hundredth anniversary of the Reformation.

The collection consists of four parts, each with two papers (complete table of contents at the publisher’s website):

Space does not permit discussing every paper, all of which were both accessible and rich in insight. David S. Dockery discussed Christological interpretation as central to the authority and interpretation of scripture. Scripture is not the final authority but Christ to whom all of scripture points and through which Christ speaks to us. Michael A. G. Haykin’s paper on Hugh Latimer highlighted his passion for the preaching of the Word of God. Latimer urged people to pray for both him and themselves that by God’s Spirit:

“…I may speak the word of God, and teach you to understand the same; unto you that you may be edified through it, and your lives reformed and amended; and that his honour and glory may increase daily amongst us.”

The following essay by Ronald K. Rittgers featured the devotional literature of the Reformation, which usually consisted of quoting one text of scripture after another, without commentary. It was believed that scripture read and meditated upon in this way was powerful to minister to hearts, a kind of “sacrament” as it were.

I also thought the last essay in the collection, by David Luy helpfully discussed both what is meant and not meant by the “priesthood of all believers,” a key Reformation tenet. He shows both that this was not meant to replace church offices or hierarchy, but rather that all Christians, having the Word of God, may share the grace of God in Christ with others.

Timothy George concludes by asking what we may learn from the Reformation, and particularly fleshes out how the Reformers ideas about scripture as the Word of God deepen and give substance to the four distinctives of evangelicalism noted by David Bebbington, without which evangelicalism is thin gruel, neither satisfying nor enduring.

It seems to me that George and the contributors to this volume have an important word to those who wish to move beyond the Reformation or are calling for a new one. In one sense, the church is to be semper reformanda, ever reforming. For some, what needs to be reformed is a “bibliolatry” that they perceive in the Reformation. No doubt, there are some that worship the Bible rather than the Lord to whom the Reformers pointed. But such bibliolatry is evident neither in the Reformers nor in this collection. What needs to be continually reformed is us–our hearts, our structures and practices, our tendencies to self-sufficiency and self-promotion, our indifference to God and other people. Only the alive and active, double-edged sword of God’s Word, illumined by God’s Spirit, pointing to God’s Son, can do this work. In this work, I was reminded afresh of the preciousness of this irrepressible Word for the people of God.

3 thoughts on “Review: The Reformation and the Irrepressible Word of God”