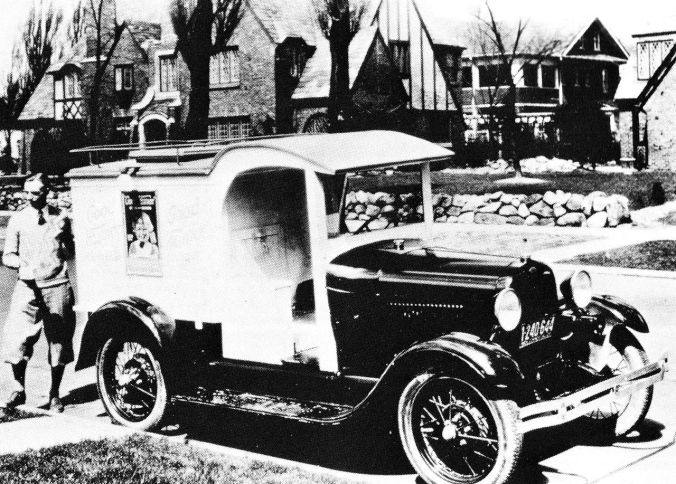 One of the joys of summer was to hear the jingle of an ice cream truck coming down the street. You would race to get money from your parents. The driver would stop and sell you ice cream treats, perhaps an ice cream bar on a stick out of his freezer. Many people don’t realize that these happy memories were the innovations of a Youngstown entrepreneur, Harry B. Burt, and his Good Humor company.

Burt arrived in Youngstown as an eighteen year old in 1893 and opened a candy store on S. Hazel Avenue in downtown Youngstown. Eventually as the business grew, he moved to a corner store at Phelps and Boardman. There were subsequent moves to 27 and 29 North Phelps. Eventually, Burt added a soda fountain, known as Burt’s Arbor Garden.

In 1920, Burt created an ice cream bar consisting of a cut out rectangle of ice cream coated with a smooth chocolate coating. His son thought it tasty but messy and suggested adding a wooden stick to hold the bar. Burt found that the frozen ice cream bonded well to the stick. About the same time, another company invented the Eskimo Pie, without a stick.  When Burt applied for a patent on his Good Humor Bar, it was initially rejected because it was too similar to the Eskimo Pie. Burt went to Washington with a pail of Good Humor bars to show the difference. Subsequently, in 1923, he received a patent for the machinery and production process used to manufacture Good Humor Bars, but not not bar itself.

Where did the name “Good Humor” come from? Burt believed there was a connection between one’s temperament, or “humor,” and one’s palate. There might be some sense to that. Few things make one so happy as a tasty serving of ice cream.

Burt purchased twelve refrigerated delivery trucks to sell the bars throughout the area, and birthed the ice cream truck. The growth of the company and the need for production space led to a move to a new location at 325 West Federal Street in 1922. At this point, Burt only had four years to see the growth of his enterprise, much of the time of which was spent in patent disputes with Eskimo Pies, and a lawsuit with the rival Popsicle Corporation. Burt died in 1926. His wife Cora took the company public and sold franchises for the next two years, then sold the business and its patents to Midland Food Products, a Cleveland company that retained the Good Humor name. Much of the manufacturing moved to Chicago. Michael Meehan purchased a 75 percent interest in the company in 1931, operating in New York, Connecticut, New Jersey, Detroit, and Chicago. There were also three major franchises in Baltimore/Washington, Oklahoma (operated by Burt’s son Harry, Jr.) and in California. In 1961 Unilever purchased the company and continues to own and market the brand to the present day. However, they ended marketing through ice cream trucks in 1976.

The building at 325 W. Federal is still standing. In 1935 Mrs. Burt sold the building to James Ross, who ran Ross Radio, an electronics business out of the building for many years. Eventually Jeff Clark took over ownership and maintained the building. Befitting its historical significance, the building was acquired in 2008 by the Mahoning Valley Historical Society as the site of its Tyler History Center. 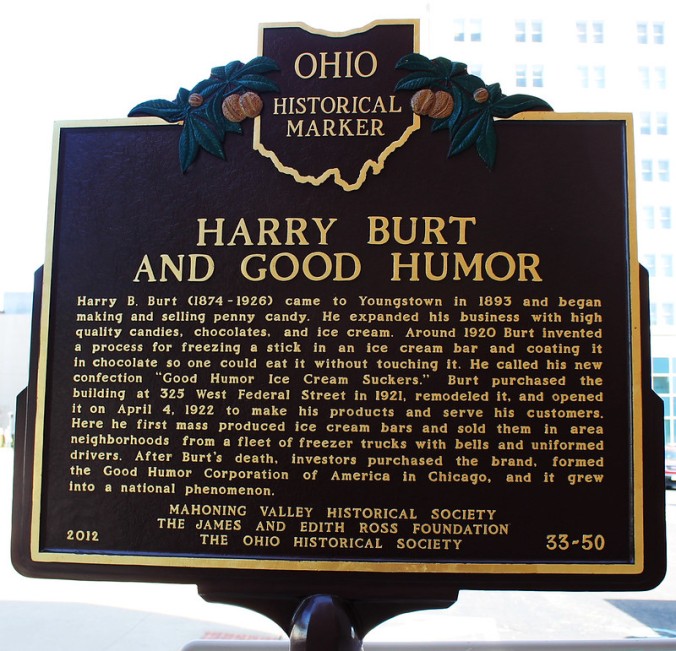 When one visits the Tyler, a historical marker in front of the building, which was erected in 2012, reminds us of the history of this building and the unique role Harry B. Burt played in the history of ice cream manufacturing and marketing from this Youngstown location. The plaque reads:

Harry B. Burt (1874-1926) came to Youngstown in 1893 and began making and selling penny candy. He expanded his business with high quality candies, chocolates, and ice cream. Around 1920 Burt invented a process for freezing a stick in an ice cream bar and coating it in chocolate so one could eat it without touching it. He called his new confection “Good Humor Ice Cream Suckers.” Burt purchased the building at 325 West Federal Street in 1921, remodeled it, and opened it on April 4, 1922 to make his products and serve his customers. Here he first mass produced ice cream bars and sold them in area neighborhoods from a fleet of freezer trucks with bells and uniformed drivers. After Burt’s death, investors purchased the brand, formed the Good Humor Corporation of America in Chicago, and it grew into a national phenomenon.

When one thinks of ice cream in Youngstown, we often think first of Isaly’s or Handel’s, but alongside these is Harry Burt’s Good Humor Bar. Whenever, and wherever, we eat ice cream on a stick or hear an ice cream truck, we have Harry Burt to thank.

4 thoughts on “Growing Up in Working Class Youngstown –Harry B. Burt and Good Humor Bars”