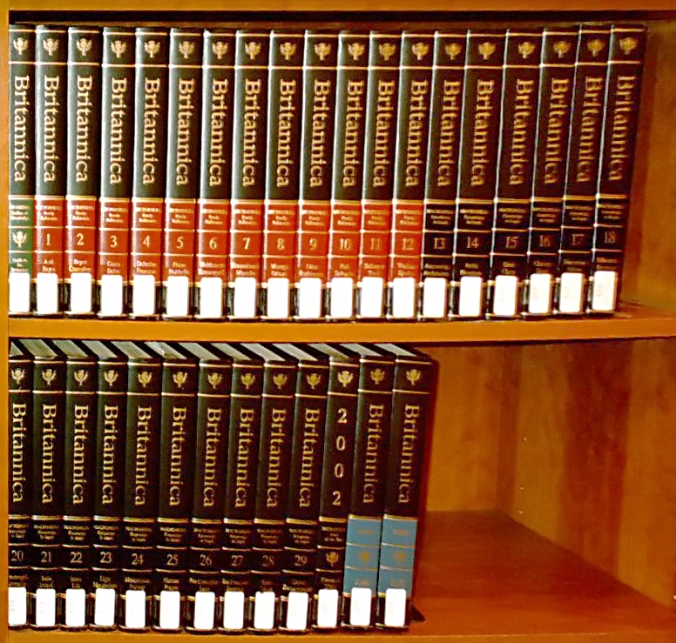 I grew up in a house filled with books, perhaps explaining the condition of my own home. One special collection of books was the bookcase of Collier’s Encyclopedias and annual updates. One of my favorite rainy day occupations was to sit or lay on the floor in front of the bookcase and page through a volume of Collier’s. There was a serendipity as one moved from article to article, learning about an aspect of human physiology, a famous person, or a distant country. Perhaps it was this that birthed the never achievable passion of a knowledge of everything that is part of my love of reading.

The word “encyclopedia” literally means “complete instruction.” I found it tremendously exciting, and a bit daunting, that at least a summary of this knowledge could be collected on the two shelves of that bookcase. It turns out that individuals and groups of people have attempted this gargantuan task since Pliny the Elder compile Naturalis Historiae in the first century, publishing a partial version between 77 and 79 AD before the eruption of Vesuvius resulted in his death. Wikipedia, our digital version of an “open source” encyclopedia includes an extensive article on the “Encyclopedia” which I will not replicate here, except to say that ever since Pliny, and in many cultures, encyclopedia making has been a consistent human endeavor.

The Encyclopedia Britannica for many years occupied pride of place among English language encyclopedias, first published in print between 1768 and 1771 and in updated print versions until 2010, which they ceased selling in 2012. Throughout its history, Britannica featured eminent contributors in their respective fields including individuals like Albert Einstein and Marie Curie, and contemporaries like Milton Friedman, Carl Sagan, and surgeon Michael DeBakey.

When I was growing up, and even into the early years of our marriage when we were contacted by one, there were encyclopedia sales persons, both door to door or even in mall kiosks. One could buy them on the installment plan, which was convenient for many since the lump sum fee was huge. Sometimes there were specialized encyclopedias. I collected a set of science encyclopedias sold at our local grocery store. Later, during a period when I thought I might be a doctor, my parents acquired a medical encyclopedia. Then there was Collier’s, published by Crowell, Collier, and MacMillan. Colliers was not quite as in-depth as Britannica and deeper than the more popular World Book. Groliers was another popular encyclopedia. It was actually the first go-to source for reports for school, until we got far enough along that we were not allowed to cite encyclopedias.

One of the challenges of encyclopedias was that they went out of date as new events occurred and new discoveries were made. Some of the countries for which there were articles no longer existed as either names changed or borders were re-drawn. Annual updates helped if you could find the updated information. Later, digital encyclopedias, which were less expensive and sometimes bundled with computers were introduced, and these were updated often.

The introduction of the internet spelled the end of the encyclopedia, as a printed book, regularly updated, and even to software versions. As of this writing, it is still possible to purchase print versions of the World Book, and older versions are plentiful in second-hand stores and online. Britannica sold versions of encyclopedias on CD’s for a time, then went entirely online. In 2001, the encyclopedia that is the default for most of us, Wikipedia, was launched. The idea was to create an open source, collaborative encyclopedia to which anyone who is registered can contribute. Many articles approach the accuracy and depth of Britannica, but the user must also beware that articles can reflect the ideological bias of contributors or even “edit wars” between contributors with different viewpoints. It is a non-profit effort funded by the Wikimedia Foundation that accepts donations to defray this effort. Currently, there are 301 language editions of Wikipedia. It is now one of the ten most popular websites in the world.

Today, online encyclopedias with their hyperlinked text, and indeed the internet itself, searched by Google, and browsed from one link to another, are our encyclopedias, putting vast amounts of information, far exceeding a print encyclopedia at one’s disposal, even from the phones in our pockets. If anything, all this even more powerfully feeds the illusion that we can know anything and everything.

While the potential is greater, it is also different from a child in front of a row of encyclopedias. Often, I read an article that interested me all the way through, while skipping the ones that did not. The lacks of links did not take me from one article to another without ever finishing anything. On the other hand, one is much more aware of how our knowledge of one thing is linked to other things. I’ll leave it to others to define which is better. What I offer is simply a memoir of a cultural transformation that has occurred within a single life.