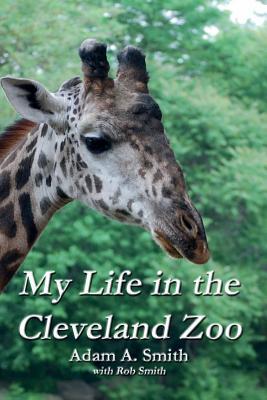 My Life in the Cleveland Zoo, Adam A. Smith with Rob Smith. Huron, OH: Drinian Press, 2014.

Summary: A memoir recounting numerous stories from the author’s years of working at the Cleveland Zoo as a tour train driver, a night watchmen, and a animal keeper with pachyderms.

Most of us who have ever been to a zoo spend most of the time noticing the animals. Rarely do we notice the other creatures in the zoo, the human beings who make the zoo work day in, day out. I found this book, sent to me by the author’s brother Rob and cousin Craig (both former Youngstowners), a fascinating account of the people behind the magic of zoos. It also brought back memories for me of the Cleveland Zoo. We lived in Cleveland for nine years, and I have memories of pushing my son around in a stroller in the mid-1980’s, particularly up and down the hills that are a part of this zoo. One thing. If you were a county resident, you could get in free, at least when we went.

Adam Smith first started working at the Zoo as a college student in the late 1960’s and continued on and off until about 1983. The book recounting these years consists of three parts corresponding to the three jobs Smith held: tour train driver, night watchman, and animal keeper with the pachyderms. Each of the sections is filled with stories of the people, and the animals, that turn driving around and around the zoo, or walking night watchman rounds or mucking out elephant stalls and hippo pools into a combination of riveting adventures or laugh out loud funny accounts–sometimes both.

One aspect of Cleveland culture was the story of going to the teamsters union hall to sign up for the union before starting work, complete with the ripped enforcers guarding the receptionist communicating, “don’t mess with the teamsters.” In the tour train years the funniest story was the great Tour Train Race. Along the way are fun stories of hi-jinks with the concession and ticket girls, and the zoo manager who keeps rehiring him long after college while he sorted out what he wanted to be when he grew up. Time and again, he came back to the zoo after trying a range of other jobs.

Eventually he had the opportunity to work as a night watchman, a full time job. His sketch of John Sich, the longtime watchman who oriented him, fleshed out a person not unlike many of laborers I grew up with Youngstown–a combination of a hunter who loved killing rats, a guy with street smarts (“never punch in early”), and utterly punctual and regular on his rounds. Adam took a very different approach, and the stories of his adventures with the junior rangers who basically slept through the shift or accompanied him in his mouse eradication ventures were hilarious, except for the time when a bow hunter was in the park and killed a deer, and easily could have killed him as well. And there were those frigid winter Cleveland snow storms!

Then the job as an animal keeper turned up on the job postings–and no one signed up. Adam learned that it was because of the feared Simba, an elephant who had attacked and injured several keepers and could easily kill you. What’s more, she was utterly unpredictable. Perhaps one of the most edge-of-the-seat and heart warming stories was when the day came that he either would establish his dominance with Simba, or wash out as a pachyderm keeper. Coached by the diminutive woman head keeper Ellen, he succeeds, followed by the tender moment of rewarding and stroking the once-fearsome Simba. The scarier incidents were actually with the hippos.

For a memoir, this is a long book with a lot of chapters, a lot of stories. In the epilogue, written by the author’s brother Rob, who edited the book posthumously, we learn that this was a much longer book. It seems that Adam Smith was a storyteller, and the truth was that I didn’t mind, because his stories drew me in. At a deeper level, they were stories of camaraderie with other zoo employees, tinged with deep respect for a number of them. They were stories of love for the animals, even the ones that could endanger his life. Finally, it was a narrative that brought back memories of a part of our life I hadn’t thought of for many years.

Thanks, Craig Smoky Roberts, and Rob Smith for sending me this book. As always, the views are my own, but I do hope they reflect well on your cousin and brother respectively, whose stories far outshine my rendering. His was a good life.

2 thoughts on “Review: My Life in the Cleveland Zoo”