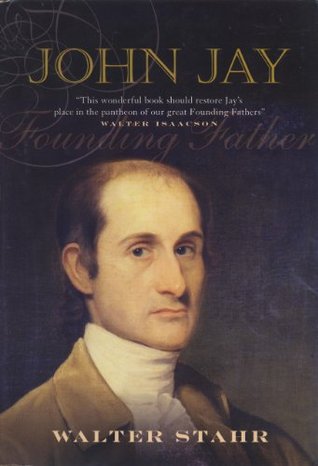 Summary: A full-length biography of this lesser-known founder, drawing on new material tracing his numerous contributions to the beginnings of the United States.

If you gathered the founders of the United States for a photograph, he would probably be standing in the back, and we might wonder, who is he? “He” is John Jay. He played critical roles in numerous deliberations, participated in critical negotiations, and held important offices. But he was never president, or a military hero. What John Jay was, was the consummate public servant.

Walter Stahr recounts the life of Jay from his beginnings as the son of a New York merchant, raised in a religious home on a farm in nearby Rye, in a faith from which he never departed. Graduating from King’s College in 1764 with honors, he becomes a law clerk to pursue a career in law. After completing his clerkship, during a time of unrest as tensions over the Stamp Act developed, he and Robert Livingston team up to form a law firm in 1768. Some of his earliest work involved working on a commission to resolve boundary questions between New York and New Jersey, foreshadowing the work that would engage him throughout his life.

As resistance turns into revolution and eventually results in independence and American victory, Jay played a key role and Stahr narrates the specifics of each of the roles he played. He played the principal role in writing the constitution of New York state, a model for early state constitutions. He played a critical role in the negotiations in the Paris Peace Treaty, setting boundaries, particularly in what would become Minnesota, that defined the country’s northern borders. Under the Articles of Confederation, he served as Secretary of Foreign Affairs for the infant country, helping establish her relations with the world. He was one of the framers of the Constitution, and worked hard behind the scenes for its ratification. He averted a renewed outbreak of war with Great Britain in 1794 that would have been disastrous for the infant country, negotiating what became justly known as the Jay Treaty. He served as the first Chief Justice of the Supreme Court, establishing the precedent of judicial review of legislation, and refusing to decide abstract questions. He concluded his career of public service as governor of New York, presiding over the move of the seat of government to Albany.

Stahr portrays a man of rectitude and hard work whose service over a thirty year period played a critical role in creating a country. His lawyerly skill with finding the right words to establish good agreements and his even-handedness allowed him to turn conflicts into compromises and agreements. In retirement, he worked with his son in founding the American Bible Society. Throughout his life, and in his declining years, his trust in the providence of God sustained him.

This account goes into significant depth in the episodes of Jays life, tracing the back and forth and frustrations of negotiations, including two relatively futile years in Spain. What I would propose is that Stahr’s book offers us a portrait of America’s first public servant, who excelled by negotiating good agreements, establishing good legal documents, understanding the details and structure of good government, and by shaping good political and judicial institutions. Such figures may not be political rock stars, but they are essential to good government in every era. It may do us well to pay attention to people like Jay.