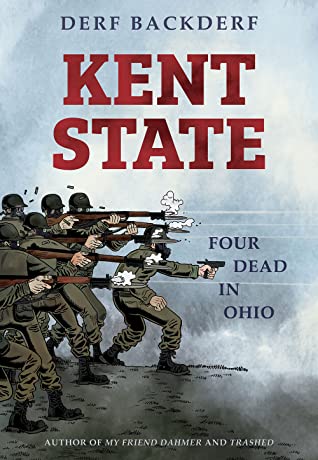 Summary: A graphic non-fiction account of the shooting of four students at Kent State University, focusing on the students who died, and the sequence of events leading up to the shooting, and the dynamics within the National Guard Troops sent to suppress the student demonstrations.

Today marks 50 years since the shootings that took the lives of four Kent State students and wounded nine others, some disabled for life. I grew up about 35 miles from Kent in nearby Youngstown. Sandy Scheuer, a student walking between classes, grew up in Boardman, a Youngstown suburb. She was a sweet, apolitical, speech pathology major until one of the shots severed her jugular. She bled to death in minutes. I was a high school sophomore at the time. We walked around school the day after utterly stunned.

The others who died were Allison Krause, Jeff Miller, and Bill Schroeder. This new graphic non-fiction work by Derf Backderf traces the last days and final moments of these four students, from May 1 to May 4. It also covers the events surrounding the shootings. It begins with the announcement of Richard Nixon of the expansion of the Vietnam conflict into Cambodia, and the student reaction, including extensive rioting at Ohio State, a debacle for then governor James Rhodes, running for Senate. with a primary election coming up that week. Backderf profiles the Ohio National Guard, portraying these “weekend warriors” as coming into Kent from a tense standoff between teamsters and “scab” truckers in nearby Richfield. Short of sleep and already on edge from fear of snipers and other attacks, they arrive in Kent confronting students who have gutted a number of downtown businesses, and set an ROTC building on fire. Furthermore, a swirl of rumored threats put them on further edge.

Bill Schroeder was an ROTC student, likable yet a serious student with increasing doubts about the war. Jeff Miller, a transfer student loved the Kent bar and music scene but was increasingly upset by the war, and the Guard presence, having been gassed and eluded helicopter surveillance to get back to his home. Allison Krause, a politically engaged student also had encounters with an increasingly hostile Guard, and was amid the demonstrators. Both Schroeder and Scheuer were in a parking lot more than 400 feet from where the shots were fired. The closest students were at least 150 feet away. Backderf’s accounts of these students corresponds to others I’ve read.

While Backderf’s focus is on the students, he does explore radical elements with the Students for a Democratic Society and the Weatherman that had been on campus, but apparently cleared out before the student demonstrations on May 4. Unfortunately, Jeff Miller’s red headband, matched descriptions of the headwear of some of the radicals. Backderf also gives attention to a suspicious photographer, Terry Norman, apparently working for the FBI or another agency. Backderf note that he was armed and in the middle of the demonstrations on May 4. He also explores the possibilities of significant government infiltration of the campus prior to the shootings.

Two things stand out in the account of the shooting. One is the origin of the shooting. Backderf, like others, cannot come to a definitive conclusion, beyond focusing on Company G, and the reported huddle that occurred in the minutes before they opened fire. All the Guardsman were “locked and loaded” meaning that had live ammunition clips in their semiautomatic rifles, with a round in the firing chamber. Guns were reloaded  with new clips afterward and no one was ever held accountable for the shootings.

The other thing that “graphically” stood out was the portrayal of the deaths and wounds of each student, including portrayals of entry and exit wounds, along with text describing the damage rendered by each bullet that struck a student. The force of an M-16 gunshot can fatally wound at 2 miles. One round penetrated a plate of steel in a sculpture. I have seen the bullet hole. Casualty numbers do not convey the terror of those moments, how the students who died never had a chance, and the utter waste of what occurred.

Although this is a graphic work, it is not fiction but an attempt to render the history of these events graphically. The artist spent time onsite, and his renderings of places, including Kent’s downtown bars are accurate. He interviewed people close to the four students and spent extensive time in other interviews and in the Kent archives. The back matter includes extensive notes detailing Backderf’s research.

On this 50th anniversary, amid a time of a country in a health crisis, an economic crisis, and already facing deep divisions, this book portrays how demonstrations can go horribly wrong. Violent words can accelerate to property damage and attacks on others. Sometimes, the forces called to intervene are not adequately prepared or properly led. Political officials at every layer of government can de-escalate or exacerbate tensions by their words and actions.

The subtitle of this work is “Four Dead in Ohio,” quoting the words from “Ohio” by Crosby, Stills, Nash, and Young, released later that summer. At the conclusion of performances, these words are followed by “how many more?” I hope this work, conveying the history of what happened to the Kent State students will renew our commitment to “no more,” even as occurred in the summer following these events. Some of us will never forget, some of us need to remember, and some of us may need to learn from this history to avoid repeating it.

Disclosure of Material Connection: I received a complimentary review galley of this book from the publisher. The opinions I have expressed are my own.