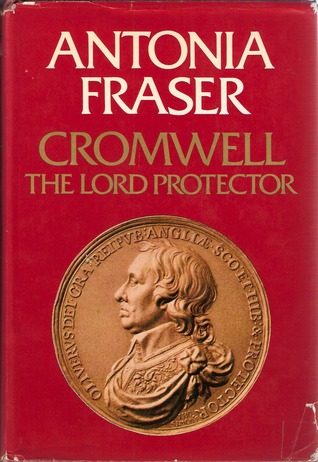 Summary: A biography of Oliver Cromwell, a military and parliamentary leader during the English Civil Wars, rising after the death of Charles I to Lord Protector.

Oliver Cromwell, not unlike his ancestor Thomas Cromwell is a tragic figure. Both men had great strengths, and great flaws. Antonia Fraser’s classic biography of Oliver Cromwell draws a highly detailed portrait of the man in all his actions that reveals both his greatness and his flaws, and the tragedies, both in and beyond his lifetime to which these led.

Fraser traces this life from its beginning as a child of landed gentry from Huntingdon, elected to Parliament in 1628. During this time period he underwent a religious conversion to Puritanism that shaped his thought and life profoundly. After Parliament’s recess for eleven years, he became the member for Cambridge in 1640, sitting in the Short and Long Parliaments, and during this period became the outstanding military leader that led the Parliamentarians to victory over the king in the first English Civil War.

Fraser characterizes the greatness of his military ability as a combination of battlefield discipline instilled through training, and the ability to “seize the moment” when enemy weakness gave the opportunity for victory. The victories at Marston Moor and Naseby hinged on his decisive actions leading to the end of the first Civil War. This was followed by inconclusive efforts to establish a constitutional monarchy.

It was only when the Second Civil War was concluded with the fall of Pembroke castle and the Royalist Scottish Army’s defeat at Preston at the hands of Cromwell, that things turned decisively against Charles I. His stubbornness was met by Cromwell’s beliefs in providence, justified by his military victories and justifying the death of Charles, by whom so much blood had been shed. Charles I went to his death January 30, 1649.

Fraser follows all the deliberations of how to compose a government, beginning with the Commonwealth in 1649, of which Cromwell was one of the Parliamentary leaders. This was interrupted for Cromwell by a military expedition to Ireland, where he presided angrily over the slaughters at the Catholic strongholds of Drogheda and Wexford, a taint on his career. His victories there opened the door to a Protestant land grab. In the following year, Charles II, crowned king in Scotland, threatened the Commonwealth. Again, suffering in precarious health, Cromwell meets the threat at Dunbar and Worcester (further acts of God’s providence) resulting in Charles II’s flight to France.

His return to what was known as the “Rump” Parliament ended with another angry speech, resulting in dissolution of the Parliament and Cromwell becoming Lord Protector–royalty in plain clothes. We see his struggle over five years to form a government shaped by religious principle, and respected among the powers. His own failing health and the government’s financial struggles doomed his efforts. Dying, he loses a beloved daughter and bequeaths the Protectorate to his son Richard, who had none of his strengths. This last less than a year until Richard fled England as the King was recalled. He lived abroad and under an assumed name most of his life.

There was good reason for his flight. Although not widespread, the King did avenge his father’s death, executing the lead figures, and exhuming Cromwell’s corpse, first hanging it, and then beheading it, the head remaining on a stake for decades. Fraser devotes significant attention the the exhumation and eventual disposition of the body and the head.

This is a long book and I found that Fraser’s accounts of the military leadership seemed to have far more energy than the political accounts, that seemed rather tedious at times, albeit exhaustively complete. What she gives us is a complex and complete account of Cromwell, from the warmth of his family relations and those with many friends, the brilliance of his military leadership, punctuated with episodes of anger and precarious health, and the religious certitude, that was both a comfort to his soul, and a contributing factor in the execution of a king, and an attempt at a radical government. One wonders if he would have been better to leave political leadership to others, nearly always a good idea for military figures. To me, Cromwell came off as one you might admire but never like, and maybe not trust, for fear of coming up on the wrong side of providence.

[Note on editions: My review is of an out of print edition published by Knopf. The link to this title is an ABE Books link to used editions. In the U.K., the book is still in publication as Cromwell: Our Chief of Men published by Orion Publishing]