Summary: A history of Chicago’s O’Hare Airport from its earliest days through to the post-9/11 environment for air travel.

I probably have flown to or through O’Hare at least a couple times a year over the last forty years. I never thought much of the history of the place until a recent trip when I walked past a series of aerial photographs showing the development of the airport over time. I realized then that the place I traveled through had gone through many changes over those past forty years–many I had not noticed.

Michael Branigan, who worked in aircraft maintenance at both Midway and O’Hare Airports shares his love and inside knowledge of these places in this book, which includes many photographs from different eras at O’Hare. He takes us back before the beginnings, when it was a battlefield for the U.S. military’s fight with the Sauk Indians in 1832. Later it became the home of a German settlement known as Orchard Place (from which the airport code ORD comes).

The beginnings of the use of this site as an airport trace back to World War II when McDonnell Douglas sited it’s C-54 Skymaster plant here. Midway Airport was too small, and this prairie site offered the land needed for the plant and runways. The Douglas plant became the first of the air-oriented cities here until its closure following the war. Branigan recounts how Chicago Mayor Ralph H. Burke had the vision for converting this to a major airport facility exceeding what was possible at Midway. The first terminal was developed and opened to commercial operations in the mid- 1950’s. At this time the airport, which up until then was know as Orchard Place Airport, was named after “Butch” O’Hare, a decorated Naval flier who died in action.

Branigan follows the development and rapid growth of O’Hare, the efficiency of its operations (except when the weather did not co-operate, as many of us who have been delayed in O’Hare can attest), transitioning into the jet age, expanding its terminals and facilities to accommodate the jumbo L-1011’s, 747’s, and DC-10’s. As I write, O’Hare handles more aircraft movements than any other airport in the world (Atlanta’s Hartsfield currently handles more passengers), and this book helps one understand how air traffic control, runway layouts and gate services all contribute to O’Hare’s success.

Branigan also traces air travel from the novelty and luxury of those early years to de-regulation and post 9/11 airport security that so many of us tolerate for the hope of secure travel. He recounts the terrible crash of flight 191 in 1979, when the engine of a DC-10 fell off just as the pilots “rotated” the plane into the air and the earlier collision of two planes on the ground in 1972. What is striking to me is that these were the two worst crashes at an airport that achieved over 900,000 aircraft movements in 2018. While one may remember the rare disasters, and the more common delays, what Branigan’s book impressed upon me was what an incredible place O’Hare is, moving so many passengers and flights safely through every day. I wonder if I’ll look at it with different eyes when I fly there in a few weeks for meetings in Chicago…

This crossed my radar in the form of an article about W.H. Smith opening its largest The Bookshop at Gathwick Airport in the UK. The company won a British Book Awards “Book Retailer of the Year” for 2019. The store sells everything from mass market best sellers to children’s books and features destination country books on their “Read Around the World Shelves.”

I started thinking about this and asked the Bob on Books gang over at Facebook about their experiences at airport bookstores. First of all, there are a number like me who come prepared to the airport with their own books, including having loaded some on their e-readers, which save weight when you travel. One person observed, “I figure if I have time to browse an airport bookstore, I have time to browse the Kindle store on my tablet.” Others remarked that airport bookstores are over-priced (like most things at airports) and mainly seem to have the mass-market best-sellers (which often aren’t bad airport or plane reads). One exception I found on my travels was Book People’s store in the Austin-Bergstrom airport in Austin near Gate 20, a reflection of the cool place the main Book People store is.

Others have had some great experiences. Some airports apparently have stores where you can purchase and return books for a discount on other books. Sky Harbor in Phoenix Airport is reported to have a store that does this. Some have found some great books in these stores: The Art of Racing in the Rain, The Dovekeepers, Gunslinger Dark Tower: Book One, Salt and Cod by Mark Kurlansky, The Year 1000: What Life Was Like at the Turn of the First Millennium – An Englishman’s World by Danny Danziger and Robert Lacey. Another wrote: “I found a book on heroes from WWII who saved many from the Holocaust at a bookstore in Brussels recently. They had separate sections for books in English, French and Flemish.”

I heard from three different people about a great store at the Mitchell International Airport in Milwaukee. Renaissance Books, located in the main terminal, features an extensive selection of used books as well as new, packed into 1,000 square feet, so like some classic used book stores, things can be stacked up. There is literary fiction, non-fiction, and even some antiquarian books near the checkout counter. One customer on Yelp wrote about spotting a whole shelf on Churchill. I’ll have to try to schedule a flight through here just to check it out!

The major bookseller in the US market is Hudsons, which may be found in many of the major airports, sometimes in multiple locations in different terminals, three for example in the Seattle-Tacoma airport. Hudsons also has a healthy online site, including downloads of audio books in Libro.FM. My sense is that Hudson’s tries for a wide selection of books for different audiences, focusing on the more popular in each topic area, as well as current bestsellers. For someone with a long layover or stranded due to delayed flights, this can be a lifesaver, if you haven’t come prepared.

Most of us don’t go the airport to buy books (except maybe in Milwaukee), but most of us who love books sooner or later wander into one of these stores. I’d love to hear about your experiences, particularly if you’ve found a really good store! 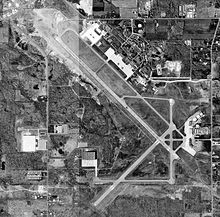 I wonder why I’m thinking about airports today? Perhaps it has to do with writing this (on Friday) while sitting in an airport in Austin, Texas.

I’m not such a big fan of flying these days, just something I have to do with my work. But I remember a time when I was a kid and my parents or grandparents would make the 10 mile or so drive out of Youngstown, and park by the fences on Route 193 and watch the planes land and take off.

There seemed to be lots of flights in and out of Youngstown back then. The airport at one time was served by United,  US Airways (and its predecessor Allegheny), Northwest and its predecessors) and even Pan Am. Back then, I suspect there was much more company travel on commercial aviation. For a time when my dad was a department store buyer, he flew regularly out of the airport.

That brings me to one of my favorite flying memories–the first time I flew. My dad was on a buying trip to Washington. I don’t remember much about the actual flight, which was on a turbo-prop plane. I got to go to dinner with all these business types and then hung out at the hotel while my dad did some business. Then we had all day Saturday to tour Washington. This was back in the late 60’s when no one worried about security threats. He had to stay in DC so I flew back alone–my first flight alone!

That’s actually the only time I flew out of what was then Youngstown Municipal Airport. I do remember one time when my grandparents went out to see Barry Goldwater during his 1964 presidential campaign. He got off the plane, made a short speech, talking about how we should send LBJ back to his ranch to toss beer cans out his window!

The airport had its beginning as a WPA project in 1939, opening a year later. It was not Youngstown’s first airport. That distinction belongs to Lansdowne Airport, on the northeast side, which opened in 1926. It’s longest runway is just over 3000 feet and it did not have the room to expand to accommodate the larger planes. On the other hand, Youngstown airport’s longest runway is over 9,000 feet long and can accommodate planes as large as a Boeing 757.

Air travel declined in the years after the mill closings and in the early 2000’s there was no scheduled service. In 2006 Allegiant Air started serving the area. Just under 7,000 people flew out of what is now called the Youngstown-Warren Regional Airport in 2005. By 2014, that number was up to 60,000, along with charters to destinations like Atlantic City. Nevertheless a large part of the airport traffic is still general aviation and military, with the Youngstown-Warren Air Reserve Station a major user of the airport.

Will air travel ever come back to what it once was in the heyday of the airport? I kind of doubt it. Under today’s air system, it is far easier to go to Cleveland and Pittsburgh where one can get a direct flight to many destinations. Apart from favorite vacation locations, there are few routes that would warrant the traffic except possibly a flight to a hub.

Nevertheless, the airport is still an important part of the greater Youngstown economy, between the general aviation and military use and Allegiant’s presence. And Lansdowne? The airport was part of a scheme to bring in a blimp company in the 1980’s that never flew. My understanding is that it is owned by Boardman Steel and still used for general aviation but is in poor condition. The AirNav website indicates the asphalt is breaking up in places and advises calling the airport manager before landing to determine the pavement condition. I’ve seen online discussion of converting the airport to an industrial park, which given its location near I-80 would make sense.

Like other aspects of Youngstown redevelopment, the use of the area’s airport space calls for intelligent and entrepreneurial decisions driven by real economic demand and not “pie (or blimp) in the sky” fantastic schemes. Hopefully the experiences of the last 40 years can lead to some wiser choices.

What are your memories of the Youngstown Airport? Did you ever fly out of there?