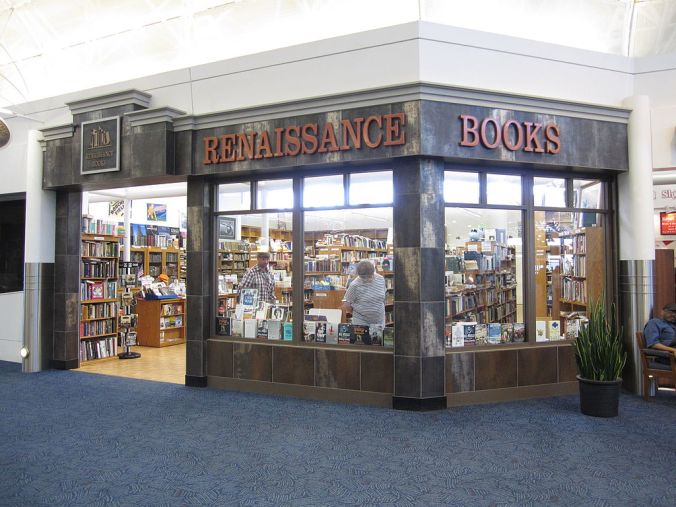 This crossed my radar in the form of an article about W.H. Smith opening its largest The Bookshop at Gathwick Airport in the UK. The company won a British Book Awards “Book Retailer of the Year” for 2019. The store sells everything from mass market best sellers to children’s books and features destination country books on their “Read Around the World Shelves.”

I started thinking about this and asked the Bob on Books gang over at Facebook about their experiences at airport bookstores. First of all, there are a number like me who come prepared to the airport with their own books, including having loaded some on their e-readers, which save weight when you travel. One person observed, “I figure if I have time to browse an airport bookstore, I have time to browse the Kindle store on my tablet.” Others remarked that airport bookstores are over-priced (like most things at airports) and mainly seem to have the mass-market best-sellers (which often aren’t bad airport or plane reads). One exception I found on my travels was Book People’s store in the Austin-Bergstrom airport in Austin near Gate 20, a reflection of the cool place the main Book People store is.

Others have had some great experiences. Some airports apparently have stores where you can purchase and return books for a discount on other books. Sky Harbor in Phoenix Airport is reported to have a store that does this. Some have found some great books in these stores: The Art of Racing in the Rain, The Dovekeepers, Gunslinger Dark Tower: Book One, Salt and Cod by Mark Kurlansky, The Year 1000: What Life Was Like at the Turn of the First Millennium – An Englishman’s World by Danny Danziger and Robert Lacey. Another wrote: “I found a book on heroes from WWII who saved many from the Holocaust at a bookstore in Brussels recently. They had separate sections for books in English, French and Flemish.”

I heard from three different people about a great store at the Mitchell International Airport in Milwaukee. Renaissance Books, located in the main terminal, features an extensive selection of used books as well as new, packed into 1,000 square feet, so like some classic used book stores, things can be stacked up. There is literary fiction, non-fiction, and even some antiquarian books near the checkout counter. One customer on Yelp wrote about spotting a whole shelf on Churchill. I’ll have to try to schedule a flight through here just to check it out!

The major bookseller in the US market is Hudsons, which may be found in many of the major airports, sometimes in multiple locations in different terminals, three for example in the Seattle-Tacoma airport. Hudsons also has a healthy online site, including downloads of audio books in Libro.FM. My sense is that Hudson’s tries for a wide selection of books for different audiences, focusing on the more popular in each topic area, as well as current bestsellers. For someone with a long layover or stranded due to delayed flights, this can be a lifesaver, if you haven’t come prepared.

Most of us don’t go the airport to buy books (except maybe in Milwaukee), but most of us who love books sooner or later wander into one of these stores. I’d love to hear about your experiences, particularly if you’ve found a really good store!