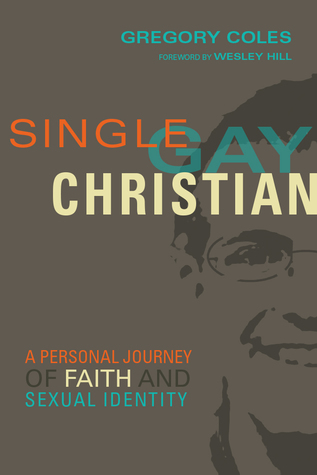 Summary: An autobiographical narrative of a young Christian who becomes aware of his attraction to other men, his struggles against this within a Christian context, his experiences of “coming out,” and how he has decided to follow Christ through all of this.

This book had me at the first page. Ordinarily, I wouldn’t quote so extensively, but I know nothing better to give you a sense of Gregory Cole’s story, and of his exquisite writing:

“Let’s make a deal, you and me. Let’s make promises to each other.

I promise to tell you my story. The whole story. I’ll tell you about a boy in love with Jesus who, at the fateful onset of puberty, realized his sexual attractions were persistently and exclusively for other guys. I’ll tell you how I lay on my bed in the middle of the night and whispered to myself the words I’ve whispered a thousand times since:

I’ll show you the world through my eyes. I’ll tell you what it’s like to belong nowhere. To know that much of my Christian family will forever consider me unnatural, dangerous, because of something that feels as involuntary as my eye color. And to know that much of the LGBTQ community that shares my experience as a sexual minority will disagree with the way I’ve chosen to interpret the call of Jesus, believing I’ve bought into a tragic, archaic ritual of self-hatred.

But I promise my story won’t all be sadness and loneliness and struggle. I’ll tell you good things too, hopeful things, funny things, like the time I accidentally came out to my best friend during his bachelor party. I’ll tell you what it felt like the first time someone looked me in the eyes and said, “You are not a mistake.” I’ll tell you that joy and sorrow are not opposites, that my life has never been more beautiful than when it was most brokenhearted.

If you’ll listen, I promise I’ll tell you everything, and you can decide for yourself what you want to believe about me.”

In succeeding chapters, Coles unfolds, often in a self-deprecating yet not self-hating fashion, his growing awareness that he was gay, his silence and attempts to cover this up by dating girls and even of trying to awaken heterosexual desires through them. He describes the scary and wonderful moment he comes out to his pastor, who listens, and loves, and keeps on loving.

We trace with him his journey to reconcile his faith, his orientation, his understanding of biblical teaching, weighing but rejecting “affirming” interpretations, which precludes for him acting on his gay attractions by pursuing intimacy with another man, and what it means for him to believe that God has nevertheless made him good.

He helps us hear what is often said in churches that affirm a “traditional” view from the perspective of a gay person. I cringed here as I read things I’ve said. He also leads us into a broader conversation about sexuality and how the fall has affected it for all of us, gay or straight.

He speaks about his choice to live single, both the heartache, and the joy. He raises the question of views of discipleship that never involve suffering or self-denial. He casts a vision for a life that is full, and has a unique capacity for relationships because of who he is as a gay man. Where the church often sees LGBTQ persons as a threat, Greg helps us see persons like himself as a tremendous gift.

Coles speaks with a voice of conviction without dogmatism. He speaks for himself and his own journey, allowing that others might conclude differently. As he writes in his introduction, he tells us the truth about himself, and lets us decide.  He doesn’t see himself as any kind of role model but simply as a “half-written story.”

I deeply resonated with his comments about encountering the “are you side A or side B?” question. He writes, “I didn’t want to be reduced to a simple yes or no. I wanted a new side.” I find myself deeply in sympathy with him. And perhaps this book might take us a step closer to that new side.

Disclosure of Material Connection: I received this book free from the publisher through Netgalley. I was not required to write a positive review. The opinions I have expressed are my own.