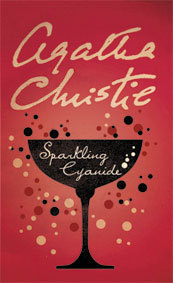 Summary: Six table guests meet a year after the apparent suicide death of Rosemary Barton, and when her husband dies by the same means, it is apparent there is a murderer in their midst.

So begins the mystery. The six will be gathered at the same table at the Luxembourg where nearly a year ago Rosemary Barton, recently ill from the flu and possibly depressed, died of cyanide in her champagne, apparently from her own hand, from the evidence found in her purse.

The six are introduced one by one.

Iris Marle is the younger sister of Rosemary. The poor younger sister, since Rosemary had received a great inheritance from her Uncle Paul, which Iris would only receive if Rosemary died childless.

Ruth Lessing is the super-efficient secretary of Rosemary’s husband George, who secretly harbors an unreciprocated love for him, and hatred for Rosemary. He relies on her to handle tough situations in work and personal life, including dispatching the devious Victor Drake, whose singular accomplishment is wheedling money from his mother Lucilla, Iris’s aunt and chaperone. She apparently succeeds, but not before Victor insinuates himself into her thoughts and arouses her hatred for Rosemary.

Anthony Browne is an American of whom little is known. He tries and strikes out in having an affair with Rosemary, and then surreptitiously wins the heart of Iris who he wants to secret away to marry, flouting her guardian, George Barton.

Stephen Farraday is an ambitious young Member of Parliament who has married into the powerful Kidderminster clan through Sandra, the shyest, but also perhaps the most politically savvy or even ruthless of the sisters. Stephen, despite his love for and appreciation of his partner, has an affair with Rosemary, realizes there is little of substance to her, and much to his wife, and painfully breaks it off, against the wishes of Rosemary who has threatened to make the affair public.

Sandra Farraday genuinely loves her husband, perhaps more than he does her, at first. He thinks she doesn’t know about the affair, but in fact she does, and despises Rosemary, reconciles with Stephen and makes common cause with him.

Finally there is George Barton. He believes the account of Rosemary’s suicide until he receives letters intimating it was murder, which leads him to move close to the Farradays, and to devise a dinner at the same table of the same restaurant nearly a year later, to expose the murderer. They arrive to find an extra place, supposedly for his friend, Colonel Race, an ex-Army Colonel and MI-5 agent who tried to warn him off this dangerous game. The empty place is set with a spray of rosemary.

After the uneasy party returns from dancing, George proposes a toast to Rosemary, and promptly collapses, also poisoned by cyanide in his champagne. It is clear this is no suicide, and that Rosemary’s death was not either. There is a murderer in their midst. But there are troubling questions. Who sent the letters? And who poisoned the champagne, when none of those at the table had an opportunity. These are the questions that stymie Race, and Chief Inspector Kemp, until an unlikely ally helps them figure it out, and thwarts a third murder in the nick of time.

The story is developed with economy and it is intriguing to see how many motives Christie contrives to make each of the parties a plausible suspect. Not unlike other Christies, it pays to attend to details, and to question your assumptions. And enjoy!