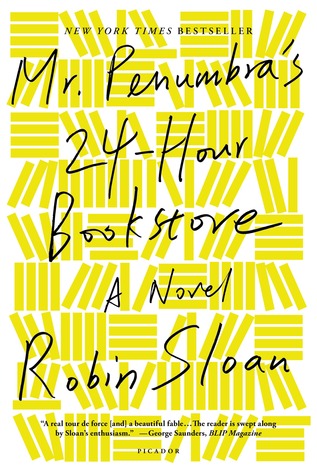 Summary: When Clay Jannon starts clerking in Mr. Penumbra’s bookstore, he discovers a most unusual bookstore with unusual customers and figures out that the store is part of a far-flung scheme pursuing one of the oldest quests.

Clay Jannon is an out-of-work web developer who happens on a help wanted sign for the late shift at Mr. Penumbra’s 24-Hour Bookstore. He takes the job. He discovers there are two kinds of customers. There are the ordinary customers who buy books in the front of the store in its eclectic and relatively limited selection. As it turns out, there are relatively few of these. Then there is a much more interesting group of members of a secret society, which we later learn is called The Unbroken Spine. They have a card with a number. They return a book and ask for another. A description of the transaction, including the person’s appearance and the book returned and requested are to be logged. No questions asked. No looking in the books. These books are in the back of the store on shelves that tower up several stories and must be reached by ladders. They are the Waybacklist.

Jannon’s curiosity gets the best of him, so he uses programming skills and the advice of geeky friends to create a 3-D visualization of the store, then programs the current log into the visualization. He discovers there is a pattern. About this time a cute girl who works at Google, Kat Potente, happens into the store as a result of a Google ad Clay wrote. She spots his visualization and they start working together to add more to the visualization by “borrowing” another log book. Penumbra happens on him in the store just as the visualization is complete. It is a face, that of Aldus Manutius, a pioneer in type-setting. Jannon has completed a task in hours that it would take other members years or even decades.

This discovery sets an unexpected turn of events into motion. Mr. Penumbra’s store is shut down and he is called to New York to meet “Corvina” who it turns out is head of the secret society of the Unbroken Spine, which has stores (really libraries) all over the world for novices to solve the first part of the quest. It turns out that the ultimate quest is to decode the codex left by Manutius, and those who have significantly progressed are all engaged in this, yet for centuries, no one has done so. It is believed that to decode Manutius will result in immortality for all the members of this secret society.

The plot turns on the conflict between old fashioned scholarly study, and the marvels of Google’s algorithms. Should such new ways even be employed? Will either yield the solution to Manutius? And what will happen to Mr. Penumbra and his store?

For lovers of bookstores, this is a great mystery, with the smell of old books and a quest for knowledge. It explores the time we are in, between the world of texts engaged by readers, and the different path of knowledge the web and its algorithms offer. The plot is a page-turner, first as Jannon and his friends (and Kat, with whom Clay falls in and out of love), try to unravel the mystery of the Waybacklist, and then the quest to decode Manutius.

If I would have one beef, it is the characters. They are quirky, but flat. They seem to be caricatures that provide the needed personnel to move a story of old and new ways of knowing forward. It almost feels to me that they are in a video game. The plot saves this book as one is drawn in by the mystery and sense of adventure. I find it interesting that the book was named a best book by NPR and several newspapers and won several other awards. It was a good and diverting read but fell short of great for me. I did like the cool, glow-in-the-dark cover, however.