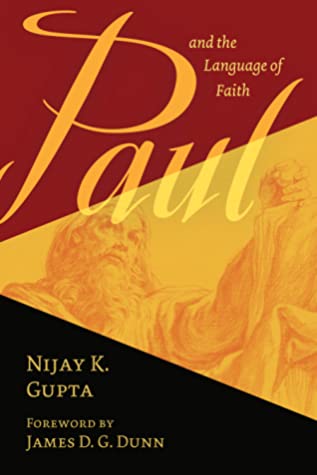 Summary: A study of the word pistis, often translated as “faith” as used in the writings of Paul, the rest of scripture, as well as in literature contemporary to the time, showing the rich nuances of meaning that must be determined by context.

In recent Pauline scholarship, perhaps no matter has been discussed more than how pistis, the word most often translated as “faith” might be understood. Underlying this are concerns of faith versus works, our understand of the continuity and distinction between Old Covenant and New, the place of human agency, and divine providence in our salvation, and epitomizing all of this, how one translates the Pauline phrase pistis Christou. Traditionally this has been translated “faith in Christ” but equally, it could be translated “the faithfulness of Christ,” depending on one’s interpretation of the genitive form of Christou.

Nijay K. Gupta takes a different slant on this discussion. He focuses in closely on the usages of the word pistis in both biblical texts and literature roughly contemporary to it. In so doing, he helps us to see that it is a word rich in meaning, variously reflecting ideas of trust, faithfulness, doctrinal beliefs, loyalty, and more, and that its meaning must be understood contextually, keeping all these valences of meaning in mind.

After laying out the issues he will deal with and his approach, Gupta surveys the scholarly understanding of “faith” in Paul from early and medieval times, through the Reformation, and into the modern era. Then he looks back to Jewish and non-Jewish writings, and shows that these also used the word, and that Paul did not write in a vacuum. He considers the gospels, which were still in oral tradition or beginning to be written and not likely accessible to Paul. In these he finds usages that reflect seeking, believing, trusting, and obeying. While faith looks to the efficacy of Jesus’ acts, it is not passive, but often acts on what is believed to be true.

The remainder of the book (chapter 5 onward) is devoted primarily to the Pauline corpus. Here, likewise, Gupta shows that pistis manifests in a variety of closely related nuances. In 1 Thessalonians and Philippians, the emphasis is on a faith(fulness) in adversity, in persecution and in imprisonment. Gupta also parallels Paul’s teaching to that of the letters to the churches in Revelation. In 1 Corinthians, Gupta shows that “Faith is recognition of and a living into a poverty of self-generated, self-reliant knowledge and wisdom. It is a clinging to the ‘strange wisdom’ of God in Christ Jesus.” In 2 Corinthians, faith looks not at material forms or idols but believes and lives into unseen realities, in this case a believing faith.

In his treatment of Galatians, Gupta explores the question of agency. In dealing with the question of faith and works, Gupta moves beyond the New Perspective’s Covenantal Nomism, which involves faith and the obligations of faith under the covenant, to what he calls Covenantal Pistism, where the focus is on the covenantal relationship with Christ, and the centrality of his mediatorial work, where faith is living “in Christ.” He then turns to the faith language of Romans 1:16-17, and argues for this reflecting the idea of trusting faithfulness that commits one’s life and existence to God.

Gupta engages, rather briefly, in a discussion of pistis Christou in light of his prior development of the idea of pistis. So often, this discussion runs along either-or categories of human faith, almost as a work, or the initiative of the faithfulness of Christ. He opts for a third way of understanding pistis Christou as participation in the faithfulness of Christ by a relationship of utter trust in Christ’s saving work. The translation shorthand for this, somewhat awkward, is “Christ-relation(ship).”

His final chapter then is one of synthesis, weaving together his ideas of faith as trust, belief, and faithfulness and his ideas of Christ-relation. This statement about human agency near the end seemed to me to capture the various strands of this study:

I don’t want to belabor the point, but this retrospective discussion of the divine-human agency question, with special interest in faith language, can help to reconceive of the matter as more than a formula (what amount of divine or human contribution equals salvation?) This is a non-starter for Paul. Christ is all in all!, he would say. But we cannot discount the way πιστις functions for Paul anthropologically, epistemologically, and socially as the way believers relate to God through the Christ-relation, which is necessarily thoughtful and participatory (socially, volitionally, existentially, etc).

Gupta offers us a valuable work that moves us beyond the either-or discussions of faith and faithfulness, of sovereign grace and human agency in Paul to one that both magnifies the faithfulness of Christ and the all-embracing life of faith in relation to Christ who has acted efficaciously on our behalf on the cross. He points the way to the richness of faith in Christ, not merely affirming doctrines, or praying prayers but a life of devoted loyalty and trust in all things, because of the surpassing great work of the Faithful One.

One thought on “Review: Paul and the Language of Faith”